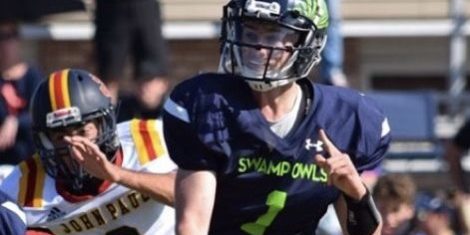 In preparation for the 2021 season, Kristian has been working diligently to improve his deep ball passing.  He has been doing long toss exercises at least five days out of the week while doing band work regularly to keep his arm in good condition.  Kristian has also been participating in a lot of seven on seven to help improve his decision making.

Kristian’s goal for his senior season is to help his team win a state championship.  He doesn’t care about statistics as long as his team achieves their ultimate goal of winning state.

Kristian states that his parents are his biggest inspiration, and have molded him into the man he is today.  Kristian gets his stellar work ethic from his mother, who he says is an extremely hard working person.  Kristian’s father taught him everything there is to know about sports.  He also taught Kristian how to shoot, how to throw, and how to bat.  Kristian also credits his father with his “junk yard dog” like mentality when he is on the field.