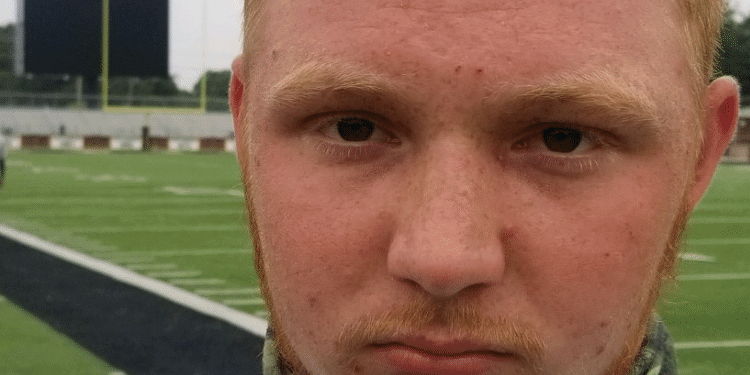 Just when one would think that the Neville Tigers could not be more of a championship contender in Class 4A, they pick up one of the best power runners in North Louisiana over the last couple of seasons in Lane Blue. At 6-0, 240 pounds, there is not a lot of players eager to stop the former Cedar Creek Cougar from plowing over other defenders. During his time at Cedar Creek High School, Blue was one of the top rising stars in the Monroe area after two outstanding seasons in which he ran for 3,260 yards and 46 touchdowns. For Blue, it was the most fun time of his football career.

“Just playing with the kids I grew up with, which allowed me to have a 1,800 yard season my sophomore year was one of my favorite memories at Cedar Creek,” Blue said.

It looked like the Cougars were going to have another two productive seasons out of the powerful runner, but in 2019, Blue suffered a season ending injury. After being on top of the world his sophomore season, Blue found himself at the bottom of it. Because of missing a whole season, it did put him behind the eight ball in recruiting.

“I haven’t had any offers or any school show any interest so far,” Blue said. “I got hurt last year so it kind of set me back some in trying to get recruited.”

At the conclusion of a disappointing junior season hampered by injuries, Blue and his family made the tough decision to transfer to another school for his senior season.

“My mom got offered a better job, and it was easier for her to make it to my games if she worked two minutes away where I went to school,” Blue said. “It was easier to get me stuff if I forgot something at home.”

Convenience was a key part in the move, but the longtime Cedar Creek student will always miss the school that helped him be the student athlete he is today.

“Some of the friends I made became family to me over the years being there,” Blue said.

Now, Blue has a new family at not only one of the best schools in the Monroe area, but also one of the historic football programs in the state in Neville High School. Trading in the green, gold, and white jerseys of Cedar Creek for the black and gold jerseys of Neville has taken a little bit of getting used to.

“Being at Neville, their football program is like an organization with having meetings and specific places you need to be to prepare for your opponent,” Blue said. “Neville feels like I’m in college.”

Playing in that college atmosphere will help Blue his senior season as he prepares on getting looked at as a linebacker prospect. Although Blue has been very productive carrying the football over his prep career, he has been just as effective in bringing down ball carriers.

“I will mainly be playing linebacker at Neville, but I have been getting some reps on offense at running back,” Blue said. “I will also be in the rotation on Friday night. My main focus this year is to play with the best of my ability and help my team win a state title.”

At Neville High School, state championships are expected as the program has won 12 state titles. The coach that has led the Tigers to four of those state titles just stepped down this year to become the principal of the school, and that is Mickey McCarty. Coach McCarty handed the head coaching reigns to former St. Frederick High School head coach Jeff Tannehill.

“I love Coach Tannehill,” Blue said. “He’s a great coach that loves to win and seems to fit the role of a head coach of the Neville Tigers.”

Blue is also settling in his role with the team as he is continuing to work on becoming a Power Five linebacker while building chemistry with his teammates.

“I’d say what sticks out the most about this years team is how close we are and how most of the players are very experience and have experience being in the semi finals every year they’ve played,” Blue said. “They play with a chip on their shoulder.”

The Neville newcomer plays with more than a chip on his shoulder in his own right. The hard work and power Blue shows is not only limited on Friday nights, but in the weight room as well squatting an incredible 585 pounds, bench pressing 335 pounds, and power cleaning 290 pounds. His combination of size and strength comes naturally because of what he enjoys doing, which is working on ranches and occasionally, wrestling calves along with steers.

“Every bit of it helps from pushing the stubborn ones through the shoot that don’t want to move to getting your hand smushed between a cow and metal to trying to catch them shifty calves so you can doctor them up,” Blue said. “You have to do all of it under the Louisiana humidity and heat.”

Having a bond with animals as well as showcasing similar talents on the football field reminds Blue of his football idol.

“I definitely admire Devin White (North Webster High School/LSU/Tampa Bay Buccaneers) because we both played running back and linebacker. We are also around the same size, and I would like to play at LSU,” Blue said.

Having strength, grittiness, and versatility to play on both sides of the football are all great qualities to showcase coaches.

“Don’t underestimate a player just because he played a different position at a 1A school,” Blue said. “They’ll see what he can do when he’s up against the greats. That goes for any player.”

However, perhaps the biggest thing Lane Blue has going for him is that after missing an entire season of football, he is ready to give opponents their own taste of the “blues” in 2020.

Click the link to check out Lane Blue’s sophomore highlights: