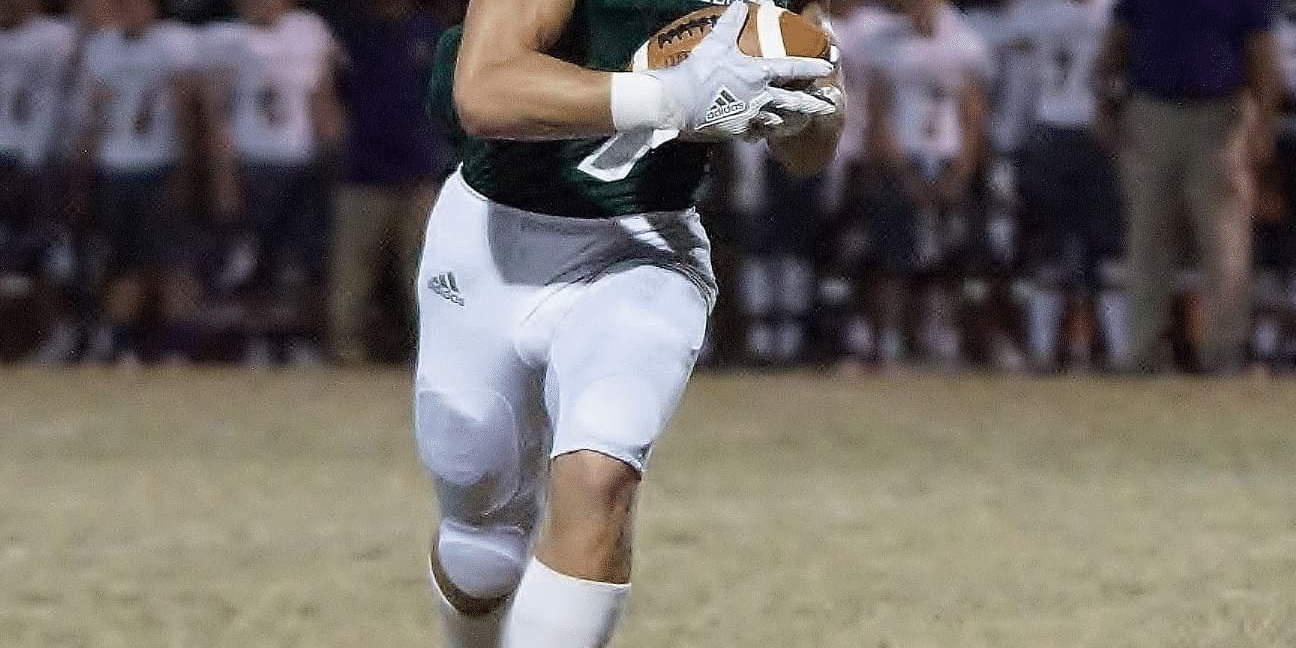 Last season, the Catholic High School (Pointe Coupee) Hornets made it to the state championship for the first time since 1978 when Hall of Fame coaches Jim Hightower (St. Thomas More) and Dale Weiner (Catholic High-Baton Rouge) were commanding the sidelines respectively. Now, one of the best young head coaches in the state in David Simoneaux helped them get to that point, but even, he would admit that it was a lot easier getting to that point thanks to the efforts of its star playmaker Matthew Langlois. At 6-0, 190 pounds with 4.4/40 speed, Langlois can impact any play in all three phases of the game whether it is offense as a running back, defense as a safety, or special teams as a kick returner. For this versatile athlete, it does not matter what position that he plays as long as he is helping his team out in the best way possible.

“I just love playing football,” Langlois said. “I really don’t have a favorite position. Obviously, I love running the football and scoring touchdowns, which is great, but I also love hitting people on defense as well as getting interceptions. I like the physicality of football and the adrenaline that comes with it.”

Being the type of player that always has the tendency to make the biggest plays, and the Honey Badger is somebody that this Hornet has always looked up to.

“I have always looked at Tyrann Mathieu (St. Augustine/Arizona Cardinals/Houston Texans/Kansas Chiefs) when he played at LSU,” Langlois said. “He is the reason why I wear number seven. He played everywhere. He could return kicks, and could play safety as well as corner so I would like to model my game after him.”

Not only does Langlois don the number seven jersey to honor his favorite player, but he also would love an opportunity to receive an offer from the university that Mathieu played for.

“I’m from Baton Rouge so obviously, receiving an offer from LSU would be one of my many dreams come true,” Langlois said. “However, any big National Championship winning school like that including Georgia, Alabama, Florida, Oklahoma, etc. would be a dream come true to receive an offer from.”

Fortunately for the All-State running back, he has received plenty of offers already heading into his senior season.

“My first offer that I received was Arkansas Monticello, which was during the season,” Langlois said. “I really started to get some attention when Louisiana Tech offered me in January and then the other offers followed.”

For Langlois, offers came in waves in February as South Alabama, UL, Navy, Arkansas State, Tulane, Wake Forest, Boston College, Houston, Arizona, Virginia, Kansas State, and Vanderbilt were all DI schools that have offered the fifth year starter. As recruiting was starting to pick up, the coronavirus pandemic occurred making it harder for schools to visit with recruits, but being in the middle of the pandemic has made it an interesting recruiting process for Langlois.

“Before the pandemic went down, I went to Louisiana Tech’s junior day,” Langlois said. “I also visited UL for a spring practice. Now, coaches from the other schools that have actually offered me are doing virtual visits and Zoom calls, which is like face to face on computers. I get to talk to different coaches and am learning about their schools while doing so. That’s all that we can really do right now, and it’s almost like seeing them in person, but not quite.”

With physical attributes such as 375 pound max squat, 225 pound max bench, 10.9 100 meter speed and excelling in two other sports at both track as well as basketball, Catholic Pointe Coupee’s all-time leading scorer wants to show the coaches that it is much more than his measurables that stand out from the competition.

“I know football, and I understand it,” Langlois said. “I am one of the hardest workers that you will find out there. I am not all talk and I let my actions speak for me. If you watch my film, then, you will see that. I always enjoy going up against the best of the best so just give me a shot and you will see.”

Langlois has gone up against the very best Class 1A in the state of Louisiana has to offer and nearly helped his team clinch a state championship.

“Most of the people did not think we would go that far,” Langlois said. “We lost two games at the beginning of the season to some pretty tough teams, but after that, we were on a roll. In the first round of the playoffs, we beat Cedar Creek. In the second round, we beat Opelousas Catholic 13-0, but it could have been worse if it was not for the rain. Then, there was the semifinal game against Southern Lab, which was one of my most favorite games that I have been a part of playing in Mumford Stadium. Going over there to their place and beating them pretty good was satisfying because in my eighth grade year, they beat us 58-0 so it was good to get some revenge on them.”

Although the end result was not what the Hornets wanted losing to the Ouachita Christian Eagles in the Super Dome, Langlois is excited to build on that and help get his team in his record breaking career to finish what they started.

“I am telling my teammates to get to work right now so when we do get back, we will be ready and have an edge over our competition,” Langlois said.

As he has done for so many seasons, Langlois’ versatility, high football I.Q., athletic ability, and leadership will show up in stinging the rest of the competition out there.