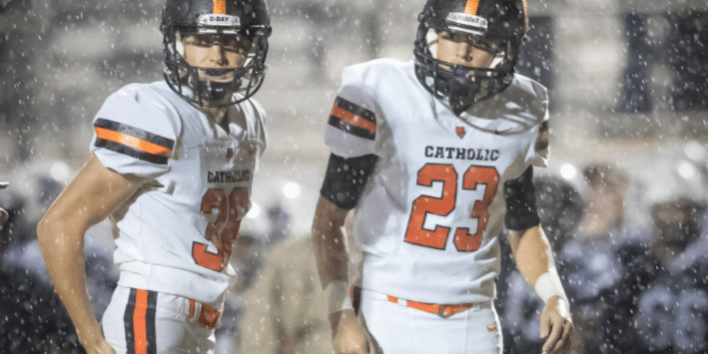 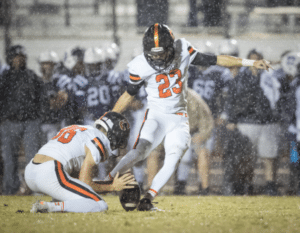 Blake Davis and Preston Stafford have so much chemistry on the field together that Davis is actually the holder for Stafford’s field goal attempts as seen here. (Photo courtesy of Tracy Ducote)

Catholic High School, located in Baton Rouge, has been known for producing plenty of great players at the next level as well as beyond including at the running back position and even at the quarterback position. However, there are also some other positions that have always been very kind to the Bears in that category and those are the special teams players most notably kickers and punters. Players such as Donnie Jones (LSU/NFL) and Jack Gonsoulin (LSU) have gone through the high school ranks playing under Dale Weiner. Both Jones and Gonsoulin have been big names and highly regarded coming out of high school. However, according to Louisiana Football Magazine’s recruiting expert Lee Brecheen, he believes that there are two players coming from this year’s senior class that have the chance to be just as good as Gonsoulin and Jones respectively in Catholic High senior kicker Preston Stafford and senior punter Blake Davis.

“I am really surprised that both these players have gone under the radar,” Brecheen said. “I think Preston Stafford has the chance to be even better than Jack Gonsoulin. He has a strong leg and has the range to kick field goals from 55 yards out. I also believe that Blake Davis is the best punter to come out of Catholic since Donnie Jones. He has a really strong leg as well to go along with great hang time on his punts.”

Both Stafford and Davis heard about Brecheen’s compliment. It turns out that being compared to those two players is what they have actually strived for all along during their perspective careers at Catholic High School.

“Donnie has been a huge help for me,” Davis said. “We talk on the phone regularly and has helped me tremendously with recruiting. It would take me hours to tell you everything he has told me. I look up to Donnie a lot and has been a mentor for me all along.”

“What a compliment,” Stafford said. “Catholic has definitely had a history of great kickers and we take pride in that. I have always looked up to Jack and he has been a great mentor to me throughout my career. He has taught me just about everything there is about kicking and I wouldn’t be where I am today without him.”

Both Jones and Gonsoulin should be proud of what their pupils have accomplished. Stafford has had one of the highest touch back percentages in school history while Davis averaged over 44 yards per punt. Both players believe that they are the best in what they do and the way they complement each other has helped the Bears achieve some great success. For both Davis and Stafford, they both brought their own talents to the table.

“I feel the biggest strength to my game is my versatility,” Davis said. “It is always an advantage to a coach and punt team to change up looks throughout the game. I have four to five different styles of punts, which gives the coaching staff more to work with in the punting game. Sometimes, it is not about how far and high you can punt one. If it is late in the game and you need the ball back, I can kick a banana punt (curveball) down the field to where the return man misses and regains the possession.”

“I think my biggest strength is my field goals,” Stafford said. “I know I didn’t have the best year or the greatest percentage, but I feel like I have the biggest and most accurate leg no matter who I am up against.”

Last season, the Catholic High Bears won the Division I state championship. The team may not have won the championship without the efforts of Davis and Stafford respectively. Davis helped a very confident defense out in low scoring playoff games against teams like St. Augustine and Evangel Christian Academy by continuing to put the opposing offense in bad field position. Also, Stafford did a great job of putting the kicks in the end zone and not giving the opportunity for the returners to make a play on the ball, but most importantly, he made big field goals when needed especially against John Curtis in the state championship game. After missing two field goals early, Stafford showed how mentally tough he was by knocking two consecutive field goals to give the Bears a 23-17 lead late in the game. Being mentally tough is an aspect that helps both players rise to the occasion especially Stafford. 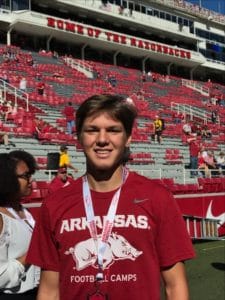 Catholic High senior kicker Preston Stafford’s dream is to play in the SEC and now he gets the chance to do so at the University of Arkansas. (Photo provided by Preston Stafford)

“Kicking is definitely a position where you need to be mentally tough in order to be successful,” Stafford said. “There is nothing like playing in the Super Dome on that stage, but you have to rely on your muscle memory and trust in the work your coaches and teammates put in all year.”

Davis actually holds Stafford’s kicks. Their support, respect for each other, and friendship has also played in both players’ success.

“Blake has grown to be one of my best friends and we helped each other everyday to keep getting better,” Stafford said. “We never wanted to be complacent. I know Blake is one of the best punters in the country and has gone definitely under the radar. His numbers don’t lie and are the top in the country. He is an even better holder and I wish I could take him with me to the next level.”

“Preston and I have a very strong relationship,” Davis said. “We can be hard on each other, but that is a good thing. All other positions have their own coach. For us as specialists, we hold each other accountable and coach each other. It is extremely important for a kicker, holder, and snapper to have that chemistry. Preston will be great at the next level. He’s got what it takes and is committed to his craft as a kicker.”

What Stafford and Davis care about the most is helping put their teammates in great position to win football games and considering both players were a part of two state championship winning teams in three seasons, it is fair to say that they have done their job.

“It is an honor to be a part of both championship wins,” Davis said. “I cannot say enough about the guys I have been fortunate enough to play with over the past four years. Although, we were a part of the first championship team and the first class to win it twice, there is no doubt that this couldn’t have happened without the players that have come before us. Cur Dog football is a mentality and only few can understand what it means to be a Catholic High football player. The players before set the stage for us. We were just fortunate enough to make it happen.”

The same can be said about their head coach Gabriel Fertitta who carried on the coaching tradition held by legendary coach Dale Weiner and took it even further.

“The day Coach Fertitta took over, he told us the program would be run the same way,” Stafford said. “I know he looked up to Coach Weiner just as we all do.”

Both players were very thankful to be in this position and accomplish all the things they have accomplished. They said they could not have done it without their parents and coaches. Now, they will try to bring what they learned both on and off the field to the college level. Stafford had plenty of looks from colleges, but playing in the SEC was the 5-11, 160 pound kicker’s number one goal. That goal would be accomplished as he signed to play for the Arkansas Razorbacks as a preferred walk on.

“I have always wanted to play and compete with the best and there is no higher level of college football than the SEC,” Stafford said. “I also built a great relationship with the special teams coach at Arkansas. Whenever I kicked there over the summer at their camp, I just felt comfortable every time I attempted to kick and every time I visited Fayetteville.”

While Stafford is getting ready to make himself known as a Razorback, Davis is also planning on playing college football as well, but he has not made his decision to where he will play. However, the All-State punter has narrowed down his decision to two schools and is planning on making the decision soon.

“I am choosing between LSU and ULL right now,” Davis said. “I am hoping to make a decision within the next few days.”

For Stafford, he is ready to go out and make his name known early on at Arkansas.

“Arkansas should be excited because I am a big leg coming to Fayetteville,” Stafford said. “I am always trying to get better and looks at every day as an opportunity to make a positive impact.”

Both Blake Davis and Preston Stafford are looking just to make a positive impact for their team. Then, playing time should follow. The Catholic High special teams duo of Davis and Stafford was very likely to be the best in the state. Both have the chance to be the next Jack Gonsoulin or the next Donnie Jones, but for right now, they are just going to go out and try to establish themselves as forces to be reckoned with.