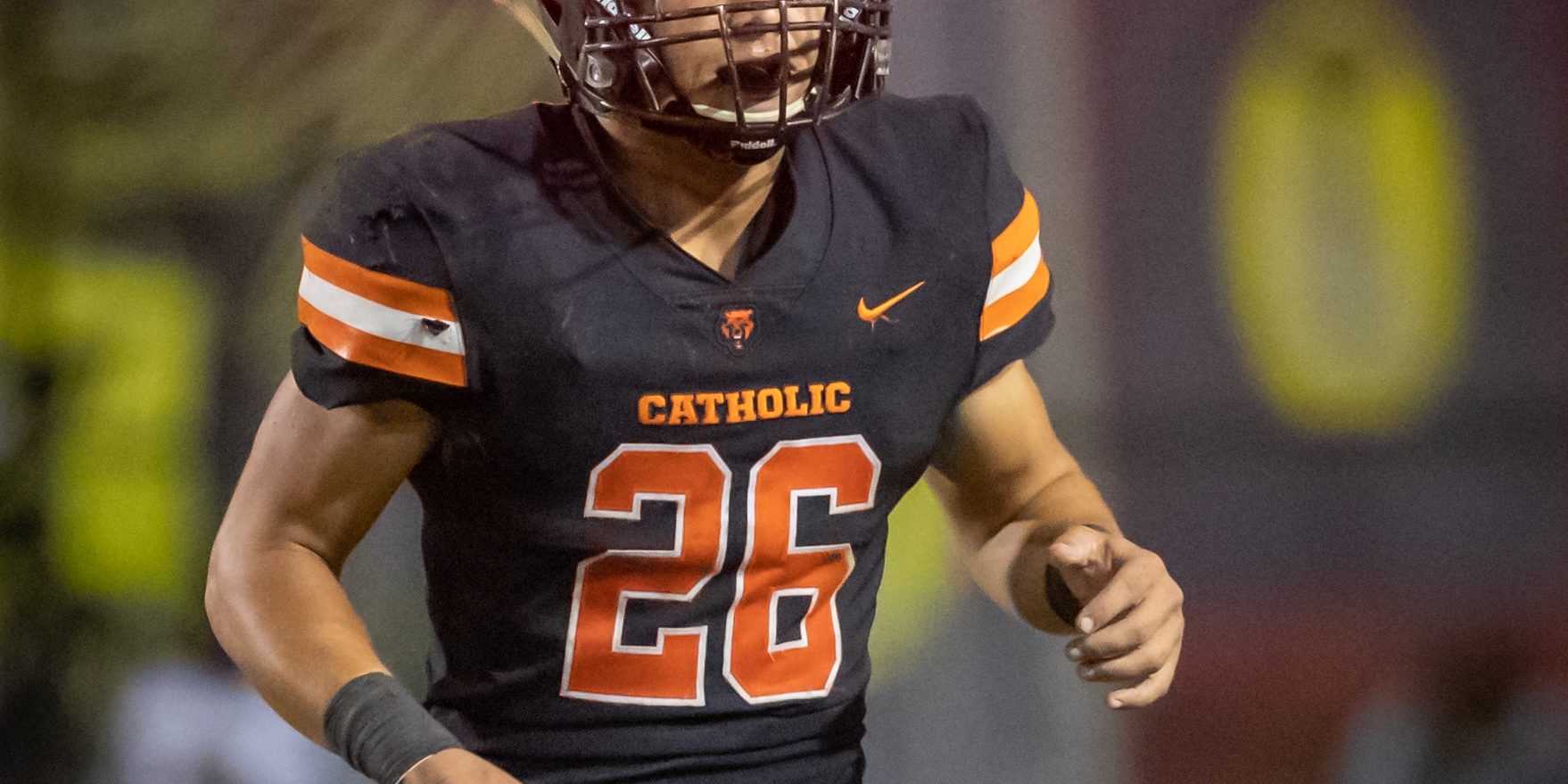 The last couple of days have been exciting for Catholic High School senior safety Michael Cerniauskas. For starters, the senior leader has finally arrived back at the CHS football facility, which means preparations for the upcoming 2020 season have resumed.

“I am fired up to be back,” Cerniauskas said. “Coach Fertitta told us that we have looked good as a unit, especially returning from such a long time off. We had a great opportunity to be better than our competition during our time off because he said that if we attack it the right way, then, it will be much easier for us when the season rolls around. Based on days of practice, it looks like everybody is staying in shape and doing their part.”

As a senior leader, Cerniauskas has done more than his part of staying in shape for the upcoming season during the unexpected time off.

“I have been working out, but not only lifting, but running and doing sprints as well as working on my footwork,” Cerniauskas said. “I have been getting some of the guys along with me to do workouts and to help them get ready as well. Mentally, I have been watching film and installs so I can be ready once the season rolls around.”

It is not only his leadership, but it is his ability to read and diagnose plays as basically the centerfielder of the defense that sets this 5-11, 200 pound safety apart.

“I think my biggest strength is not knowing what I am doing, but what the other players are doing, and how that affects me” Cerniauskas said. “Being able to help line my teammates when they do not know where to line up and to also diagnose what the opposing offense is doing in order to let me play faster on Fridays.”

Even though Cerniauskas is one of the smartest football players on the team in terms of his football I.Q., he really wants to show improvement in that side of the game.

“I want to improve on the small things like my footwork,” Cerniauskas said. “I would have to say my football I.Q. is pretty good, but there is always room for improvement, and that helps you react faster and play faster during a game. Those are the two biggest things for me, and most of all, I just want to win every game this year on Friday no matter the circumstances and how big the game is. It is about just getting the win no matter what.”

For last season’s Catholic High School Bears, there were a lot of great victories and schools records that led the Bears to the Division I state championship game including one moment that Cerniauskas made during one of the biggest regular season games in the state.

“The pick six that I had against Edna Karr was a special play for me from a sense of the plays that I have made before,” Cerniauskas said. “It was a big time statement game for us saying that we are no joke and we came ready to play. As a team, my favorite game was against John Curtis when they came down to Baton Rouge for the semifinals. The atmosphere there and being able to shut them down was one of the most fun games that I was able to be a part of. There were a lot of great games too including against St. Thomas More when we won on a last second field goal.”

Victories against three of the biggest football powerhouses in the state along with posting an undefeated regular season proved that the 2019 Bears were a special team, but if there was a downside, it had to be the last game of the season where the Bears fell to the Archbishop Rummel Raiders for the Division I state championship game. For Cerniauskas, last year’s loss is fuel to the fire that has helped give this entire team motivation to be more than prepared in the offseason.

“Yeah, we definitely had a heck of a season last year with our only loss coming in the state championship, which was an absolute heartbreaker too,” Cerniauskas said. “I know the guys that are returning from last year are really hungry and are rocking and rolling so we don’t have to feel that one again because it was not the best feeling in the world.”

“The only drawback to the whole recruiting process has been that the coronavirus pandemic has limited recruiting visits and slowed down the process in general,” Cerniauskas said. “I have really enjoyed the process of going to new places and forming new relationships with schools before everything has been shut down.”

In speaking of shutting down, Cerniauskas has decided to commit to the Army Black Knights three days ago.

“I committed to Army and I was just ready to take that next step,” Cerniauskas said. “I like every part of Army and their football team as well as the school. I decided it was time to get it rocking and rolling with them because I didn’t want to wait until after the season. I want to stay focused during the season by winning games on Friday nights and getting that off my chest as well as knowing where I am going will help me focus on my senior season.”

Cerniauskas has approached the recruiting process in a mature way and it is the people around him that has helped him handle the attention.

“We’ve had a lot of guys that have gone on to play college football from the last two classes,” Cerniauskas said. “Jonathan Mestayer (Catholic High School/Tulane) has been one of the guys that I have really learned from my position group, and I still workout with him during the quarantine as well as Cameron Dartez (Catholic High School/Tulane). I have also talked with Connor Finucane about the process and now, he is heading up to Army to play football. There have been a bunch of guys that have been supportive and are always there if I need anything, which is one thing that is cool about Catholic High School and how tight all of our teams have been.”

Coach Gabe Fertitta has been just that of every one of his players, and now, being a part of his first ever class that has been with him for four years will make this upcoming season even more special for Cerniauskas.

“His first season as head coach was my freshman year so I had him all four years since I have been here,” Cerniauskas said. “It has been a heck of an experience and is my most favorite guy that I have ever played under. He has done a great job obviously shown by what we have accomplished these past couple of years. He brings a type of energy everyday that helps us get rolling. It has been a great three years and looking forward to my fourth year playing under him.”

For Michael Cerniauskas and the Catholic High Bears, they hope this ride is even better than the last.

Click the link below to check out Michael Cerniauskas’ junior highlights: