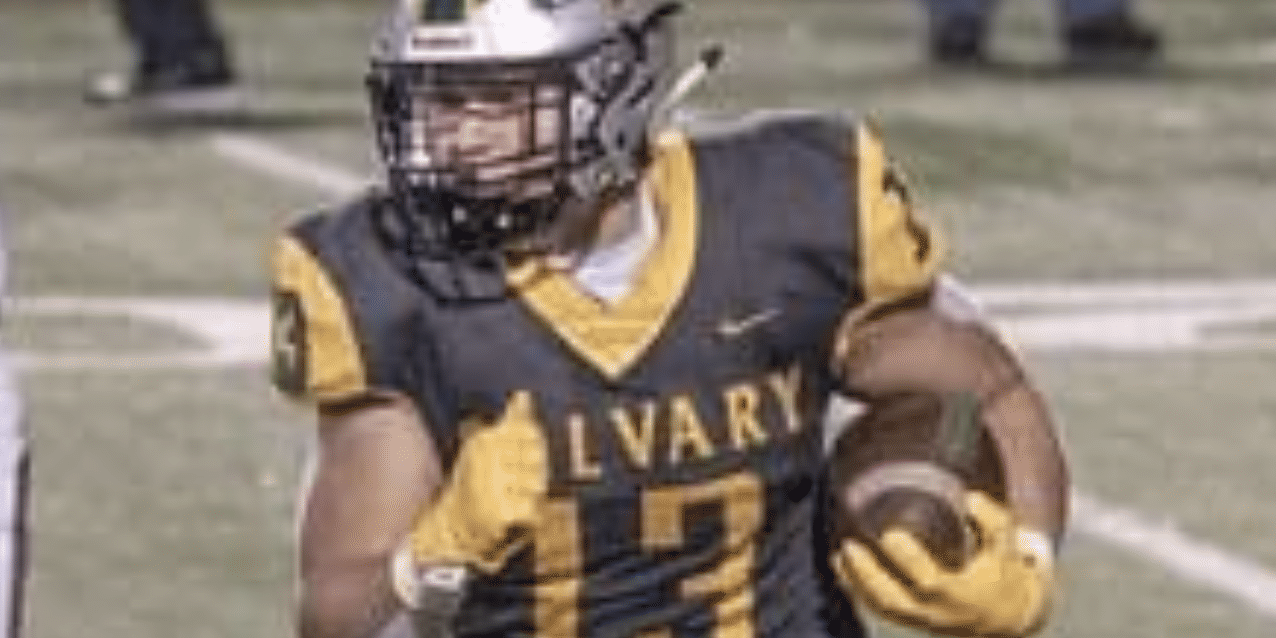 Last season was an incredible run for Rodney Guin and the Calvary Baptist Academy Cavaliers not only winning the Division IV state championship, but setting many records along the way. In fact, stat popping quarterback Landry Lyddy threw for a state championship record 464 yards against Ouachita Christian High School. Of course, guys like Lyddy and his dynamic receivers accounted for a lot of those yards last season, but this season, Lyddy will have to rely on a bigger option in the passing game as both Lyddy’s top two targets in Jordan Wallace and Joseph Wilson have both graduated. Still, there is a bigger target that does return for Lyddy’s arsenal, and that is the versatile 6-2, 225 pound tight end Miles Williams, who also lined up at different positions to give defenses another look.

“Since we had a 4.4 guy and a 4.5 guy at our wide outs that were big play makers, I only had 6 catches for 113 yards and four touchdowns as well as 205 rushing yards. I also had four sacks and 28 tackles on defense,” Williams said.

The 2nd Team Class 1A All-State selection has played tight end, defensive end, and even running back. Talking to Coach Rodney Guin, he expects Williams to be more involved in the offense because of his 4.72/40 speed as well as his ability as a pass catcher. Still, Calvary’s Swiss army knife wants to add other skills to his arsenal.

“I need to improve on being able to hold my block longer to give my guys more time to get the ball up the field,” Williams said.

Getting up the field was something Williams saw a lot of last season when his offense put on a scoring clinic in the majority of its state championship season, and it was what he was seeing during the offseason in practice that made him realize that last season was going to be a special season.

“I thought the team was special from the beginning,” Williams said. “We all worked together and pushed each other no matter what. I knew when we all felt like brothers, and were really tight together. That’s when I knew we were in it to win it. It was an amazing feeling to bring the championship back. The love from everyone was awesome and still doesn’t even feel real.”

Originally from North DeSoto High School, Williams transferred to Calvary Baptist at the start of his junior season, and it turned out to be the best decision he has made both in the classroom as well as on the football field.

“It was a better fit for me, and I liked the Christian school aspect about it,” Williams said. “I liked how they threw the ball more so all around sounded like a no brainer to me to move to Calvary.”

This move has made Williams one of the most versatile weapons heading into the 2021 season for Louisiana high school football, but because of his versatile, it is hard for him to focus on one position to prepare for at the next level. However, there is one position that Williams definitely wants to play at the college level.

“I want to play tight end in college, but when it comes down to it, I will play wherever will benefit my team,” Williams said. “Most colleges have just said that I fit a lot of there schemes because I am so versatile.”

Some of those colleges that have talked to this multiple position player are Lamar, Louisiana Tech, and Jacksonville State. Although Williams has yet to receive an offer, it is hard to find guys with guys his size that are reliable receivers and great athletes with the ball in their hands. Well, the athletic Williams’ secret to being that type of player is actually playing tennis.

How the tight end is used in the offense will play a big factor for the school that he decides to enroll in, but for the most part, Williams just wants the opportunity to play somewhere.

“I will do whatever it takes to make the team win, and I can play anywhere on the field,” Williams said. “I work hard, and they won’t regret taking a chance on me.”

This hard worker is already an All-State performer and a state champion so Williams is looking to accomplish even more in year two at Calvary.

Click the link below to check out Miles Williams’ junior highlights: