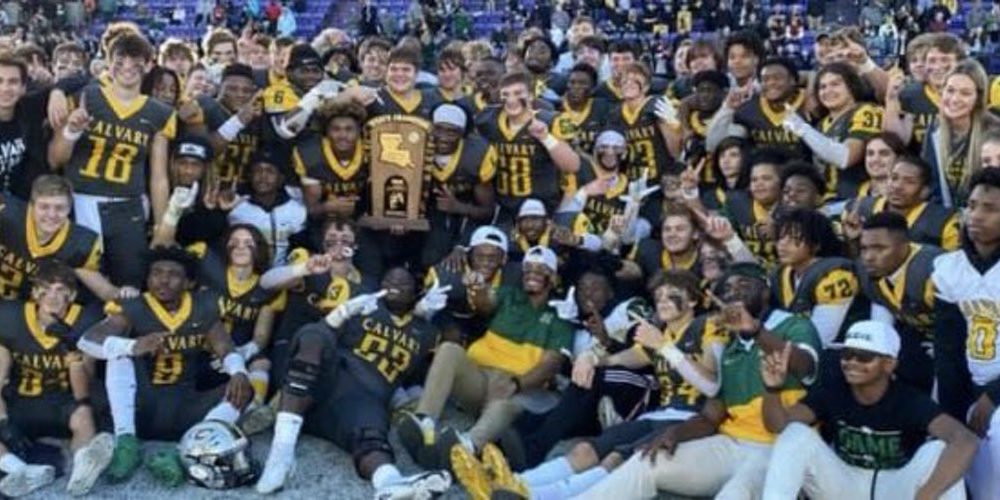 After coming off a Quarterfinal appearance while losing 16 starters from the previous season, there were a lot of uncertainties heading into the 2020 season for the Calvary Baptist Academy Cavaliers, and with COVID playing an impact in shortening the offseason, there were even more questions for head coach Rodney Guin along with the rest of his coaching staff.

“It was a trying year for everybody, and that’s for sure,” Coach Guin said. “The hardest thing is not knowing who we are going to play, but our kids handled it well. We actually scheduled two games the week we played including Archbishop Rummel and Clarksville High School (Arkansas). We decided that we were going to play every week if we could regardless of who we played.”

That strategy worked out as playing Class 5A powerhouses in Rummel and C.E. Byrd as well as playing out of state matured the team to achieve some incredible feats later on.

“It helped us because I thought last year, we were not conditioned to play because our kids played only in first halves of games in district so our goal was to schedule as good as we can early in the year, and the Rummel game fell in our laps because of COVID so we were grateful to get that matchup,” Coach Guin said. “We knew that it would be great for our team in the long run because we knew that we were not going to play better teams than Rummel and Byrd for the rest of the season.”

After starting the season at 2-2, the Cavaliers took advantage of their growing pains and got on a winning streak for the rest of the regular season winning the district with a 6-2 overall record. By the time the Cavaliers entered the playoffs, their young talent was coming in at full force.

“We knew that we were going to be pretty good talent wise, but we were just young at a lot of positions,” Coach Guin said. “We played well down the stretch and knew if we stayed healthy, we had a chance to win the whole thing.”

Playing tough teams at the beginning of the season set the stage for the Cavaliers to make a deep playoff run after coming up just short of a state championship the season prior.

“In the first round, we outmanned St. Martin’s athletically, but Catholic Pointe Coupee was playing with a lot of confidence in the next round after finishing runner up the year before with one of the best players in the state in Matthew Langlois (LSU signee),” Coach Guin said. “We pulled away in the second half, but they played a great game. Then, we played a very talented Southern Lab, and we had to make some adjustments because of their athleticism. It was big that we got past them as well.”

“Since we are a young team, there were a lot of guys that did not play in that game the season before,” Coach Guin said. “It probably did not mean as much to them as it did the coaching staff. From the coaching standpoint, I thought we let that one get away more than the players. It was a big deal for us and we knew that we would have to play OCS at some point to get where we want to go. We were excited to play in that championship game.”

The offense was especially excited led by junior quarterback Landry Lyddy, who set a LHSAA single game state championship record with an incredible 464 yards passing along with five touchdowns. It was an offensive explosion for the Cavaliers in their dominant 62-41 victory.

“We knew that we could move the football, but I don’t think anybody expected for us to throw for that many yards,” Coach Guin said. “I thought our skill guys were better than their backend guys on defense. I knew we could score some points as we scored a lot of points the year before, and we got beat. They had a hard time trying to stop our outside guys, and that is what gave us the advantage at the start.”

There were not a lot of seniors on this year’s Calvary team, but the seniors that were a part of the Cavaliers’ third ever state championship victory in seven seasons played a pivotal role.

“Joseph Wilson and Jordan Wallace were our main go to guys on offense,” Coach Guin said. “They had 130 catches between them and 1,000 yards each. They combined for most of the touchdowns in the state championship game. On defense, Trey Kelly and Jeremiah Brown were veteran three to four year starters in the secondary. Then, our middle linebacker Dustin Lang, who was a three year starter, was also our leading tackler. Those three guys on defense played well considering the defense was on the field for three fourths of the game with the offense scoring so quick.”

Despite the losses of Wilson and Wallace, the offense has no intention in slowing down as it returns a lot of young talent and a talented passer. Being around Dak Prescott (Mississippi State/Dallas Cowboys) when Guin was the head coach at Haughton High School, the longtime coach certainly knows great quarterback play.

“Landry has a lot of potential as this is his first year playing,” Coach Guin said. “He is as good as I have been around when it comes to looking at a defense and deciding what to do. Our offense is not based on just calling plays, but it is based on making decisions on the fly. He is great at doing the little things and throwing the football. We are excited to having him back, and that is for sure.”

Overall, the Cavaliers are excited for things to come starting in 2021.

“We think we are going to be pretty good,” Coach Guin said. “We have all of our linemen coming back on both sides of the ball, which may be as good up front as any team I have ever coached. We got our quarterback coming back, and we are excited knowing that we can make a run at it next year too.”

Coach Guin and Calvary Baptist are looking to make that run full speed as well from start to finish next season.