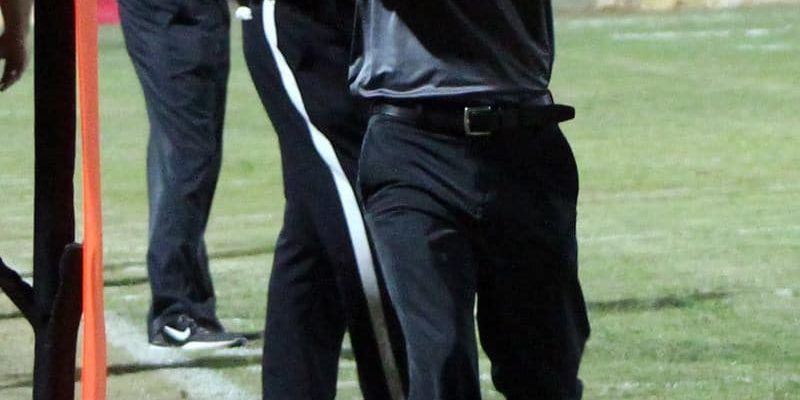 Current Bunkie High School Head Coach Nick Pujol has enjoyed the game of football as long as he can remember.

“Ever since I was a kid, I can remember football being a big part of my life,” Pujol said. “I can always remember waking up on Saturday mornings to go to LSU football games.”

However, it was playing at Bunkie High School that actually gave him the tools that he needed in order to be in the position that he is in today.

“I played at Bunkie High School for four years,” Pujol said. “I played four sports during that time. I never was the most talented guy, but I really gravitated to the X’s and O’s, and that really helped me.”

“My high school coach Gregg Hudson was a big influence in my coaching career,” Pujol said. “He was the head coach at Bunkie from 1997 to about 2004. Then, he coached at other places including St. Martinville High School and Fontainebleau High School.”

Even though Pujol considered coaching, it seemed to be just an afterthought for Pujol, who attended LSU to become an athletic trainer.

“Really, I was just going with the flow,” Pujol said. “I attended LSU and became a student trainer. When I graduated, I worked at my family’s company for a while and then soon after, I became an assistant coach at Bunkie. Three years later, the head coaching job at Bunkie became available and I applied for it.”

Then, the rest of it is history as Pujol was named Head Football Coach at Bunkie High School on May 26th, 2016. For Pujol, his biggest goal is to bring stability to the program as the team had to make its fourth different head coaching hire in four years. Well, that goal has already been accomplished as Pujol has just finished his third season at the school. In his first season, the Panthers made the Class 2A playoffs with a 4-7 record. In 2017, the team once again made the playoffs with a 3-8 record ultimately losing in the first round of the Class 2A playoffs to the Amite Warriors. Last season, the Panthers have had another playoff season and finished the season at 4-7 losing to the Kinder Yellow Jackets in the first round of the Class 2A playoffs.

Considering that the Panthers are not considered a powerhouse program like many others and that they do not produce as much college players as other teams, Pujol encourages his team to embrace the tough competition.

“I really glad that Many High School is playing in our district,” Pujol said. “I enjoy playing them because I get to show the kids what it is like to face an elite program. It gives you something to shoot for or build on. Playing programs like that and being competitive with them puts you in the right direction.”

The right direction is what Coach Pujol is trying to put his team for the 2019 season. After finishing 4-7 last season, there is plenty of optimism for this upcoming season to be one of the best since he started his tenure.

“Last year, we had a lot of turnover,” Pujol said. “We had to play a lot of sophomores and freshmen so we had some growing pains. The good news is that we return everybody. We really look to our skill guys to be leaders. We won’t be big because we lost a lot of our linemen, but we will be a team that has experience. Like in years past, we will be a team that competes for an entire four quarters and we will do so by controlling the tempo of the game by running the football and playing good defense.”

Some of the players Pujol are going to rely on for this season are junior QB Graham Rebouche, who started under center last season, junior RB/DB Lataj’drick Howard, and sophomore RB/LB Hayden Sauseda, who led the team in tackles last season. He is looking for those players to step up like some of the top players he has coached as either an assistant or as the head coach at Bunkie.

“Jaylen Mays and Tyler Marks are two of the best players I have coached at Bunkie,” Pujol said. “Mays was a dynamic player for us as both a quarterback and as a defensive back. He was a dynamic player, but he had to miss his junior year because of suffering a gunshot wound. It was incredible to see him fight through that, come back, and have the season he had. Then, there is Marks, who was a two way player for us. He was small for his position, but he stood out to not only us, but the rest of the opposing coaches that we played against. He was an impact player.”

Coach Pujol is looking for those type of guys to help Bunkie take the next step as a program and for Pujol, he would like nothing more than to see this program succeed.

“I have been very fortunate,” Pujol said. “The principal has graduated with me and everybody here is very close. The fans here are phenomenal. We are going to try to keep the pride here. Everything is going well, and we are going to give it our best shot this upcoming season.”