Building the Program Up To The John Curtis Standard, White Castle Gets Huge Win Over East Iberville

Building the Program Up To The John Curtis Standard, White Castle Gets Huge Win Over East Iberville 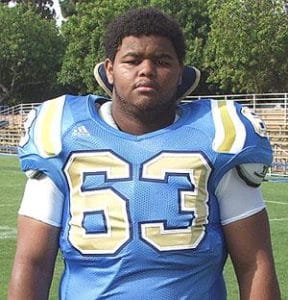 Aaron Meyer decided to take his talents to the West Coast when he signed with the UCLA Bruins in 2004 and played there until 2008. (Photo courtesy of 247 Sports)

Not too long ago, White Castle High School Head Coach Aaron Meyer was a highly recruited offensive lineman playing for the legendary J.T. Curtis and the John Curtis Patriots. Winning was something that came natural for the program. In fact, Meyer played in the Superdome all four years of his prep career including winning the state championship twice.

Meyer learned to be a great football player under J.T. Curtis as he became a four year letterman and earned scholarship offers from Clemson, Colorado, Louisville, Mississippi College, Northwestern, Georgia Tech, and West Virginia. In the end, Meyer, who was a three star prospect, signed with the UCLA Bruins as part of the 2004 signing class. Meyer reflected on why he chose to go that far away from home in Louisiana to attend college and play football in California.

“To be honest with you, it was the love of the education,” Meyer said. “It was an opportunity to get to a different part of the country at a young age. For me, it was about experiencing something different and stepping out to see what was out there. Looking back, I wouldn’t have changed my opinion at all.”

Meyer graduated from UCLA in four years and transferred to Nicholls State for his final year of eligibility. Even though Curtis coached Meyer in order to have a chance of playing at the DI level, it was what Curtis taught Meyer as a teacher and an educator that affected his future the most. 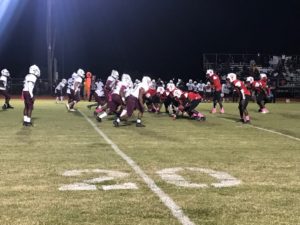 After arriving back home and finishing his eligibility at Nicholls State, Meyer immediately sought out a career in coaching. His first job was becoming the offensive line coach at Donaldsonville High School, and he took that position from 2009-2011. Then, he served as the offensive coordinator at Morgan City in 2012. The following year, Meyer went to St. James in order to become the offensive line coach where he served there from 2013-2014. In 2015, he gained experience coaching the other side of the football as the defensive coordinator at South Plaquemines. In 2016, Meyer went to Washington Marion where he served as the special teams coach and offensive coordinator. All of these opportunities have led him here at White Castle High School.

“I originally came in here as the offensive coordinator,” Meyer said. “When things transpired in early 2017 that was out of my control, I applied for the head coaching job and now, here I am.”

Meyer’s first head coaching opportunity did not come as easy as his high school playing days were at John Curtis originally. In 2017, the Bulldogs won two games and last season, the team won three games. However, the Bulldogs have gotten better and better after each season. Those first two seasons have led the Bulldogs to their breakout season in 2019. Entering Week 7 of the high school football season, the Bulldogs already equaled their winning total with a 3-3 record on the season. Not only were the Bulldogs at .500, but they were also really high in the power rankings being ranked in the top five for Class 1A. Smart scheduling and great team wins over 4A opponents Morgan City and Tara as well as a 2A victory over West St. Mary’s have helped the Bulldogs achieve that high ranking. Even though White Castle was highly ranked in the power rankings, Coach Meyer intended not for his team to really look at it. 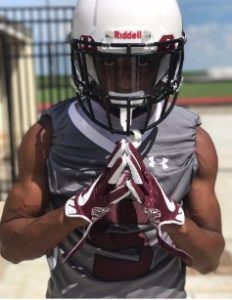 White Castle High School senior ATH Javier Batiste has made a big difference for the Bulldogs this season. (Photo provided by Javier Batiste)

“We spend little time trying to teach them how power points work,” Coach Meyer said. “They can inflate your head so we understand that winning the football game is the most important thing.”

What the Bulldogs were really preparing for was last Friday’s game against the East Iberville Tigers. After coming off a tough district loss to Ascension Catholic the previous week, the Bulldogs were ready for their matchup against the undefeated Tigers, which were having their best season to date. Even though the Bulldogs already had some big wins earlier this season, a win against the Tigers would mark the biggest win of the season as well as arguably the biggest win of Coach Meyer’s young coaching career, especially since the Tigers defeated the Bulldogs in their last two matchups, especially a 40-0 shutout loss last season.

“They pose a lot of problems just due to the fact that they run the Wing T double slot type offense,” Meyer said. “Defensively, they have a lot of team speed and they have some size on the defensive line. Whether you play 1A or 5A, defending this type of offense is something that you won’t see consistently.”

This big district battle was something to see on a cool Friday night in St. Gabriel. Both teams went back and forth all night long. The Tigers grabbed the upper hand when they went on a long drive and scored a touchdown to put them up 20-14. It looked like it was going to be another win for the Tigers, but fortunately, the Bulldogs had senior Javier Batiste at quarterback. Batiste had two touchdowns earlier in the game. This time, he went back to throw and the ball looked like it was going to be incomplete as an East Iberville defender separated a White Castle receiver from the ball. That was the case until Marcus Williams came out of nowhere for the Bulldogs and picked the ball out of the sky and raced down the sidelines for the touchdown to tie the game. Batiste would then do what he does best and that was make defenders miss on a successful two point conversion to give the Bulldogs a 22-20 lead. It looked like the Tigers got the momentum again when Batiste threw a crucial interception late in the game. However, the Bulldogs’ defense, which has been fast and swarming to the ball all night made a huge sack on Tigers quarterback Roderique Valentine to turn the football on downs and give the Bulldogs the win in a top five Class 1A matchup. This win gave the Bulldogs their fourth win of the season and most importantly, gave them a two spot jump at number three in the Class 1A power rankings.

Batiste, who made our 1st Team All-South Louisiana team as an athlete, was the difference maker down the stretch to help give the Bulldogs one of their biggest wins in recent memory.

“It was a great moment,” Batiste said. “They have beaten us for the last two years. This year, all we wanted was to win this game. Last year, the loss brought us all the way down, but this year, after this win, I feel like it brought us together again as a team. As a result, I believe we will go far this season.”

This was the type of victory that Meyer had plenty of during his playing days for the Patriots. Playing for a winning culture and for Coach Curtis had ultimately led him to a team like White Castle that once had great winning tradition going back to the days when they won the state championship in 2010 with Ronald Martin (LSU) at quarterback, and now, bringing that winning tradition back.

“What I learned from Coach Curtis was to just stick to the process and to not get upset when things do not go our way,” Meyer said. “We won two games the first season, three the second season, and right now, we are on our way to do even better than that. At the end of the day, you just have to stick to the process and understand why you are doing it.”

It may had to take a couple of seasons, but it is clear now that the Bulldogs are buying in!

Check out some highlights from White Castle’s big victory against East Iberville!