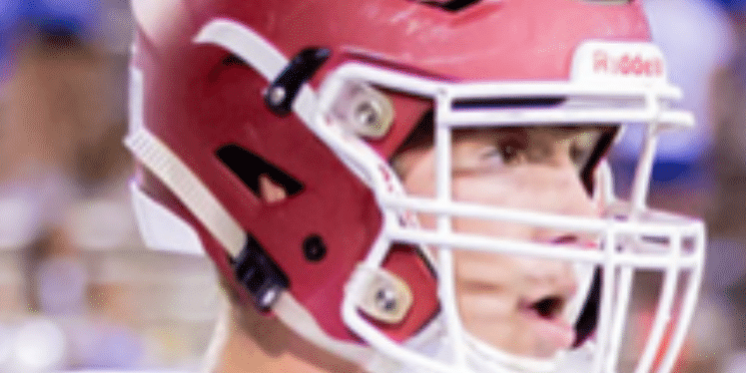 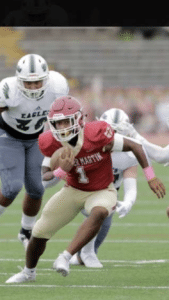 Under head coach Mark Bonis, the Brother Martin Crusaders have conquered each of their opponents so far in 2020. After an impressive 6-0 start, the Crusaders are ranked as the number two team in the state of Louisiana according to Max Preps and have earned their ranking by defeating some of the toughest teams in the state including the defending Division I state champion Archbishop Rummel High School Raiders. If one would ask Coach Bonis and the veteran coaching staff what has paid dividends the most in this Coronavirus stricken season, it would be because of a big and reliable senior class. Three Crusaders seniors in particular have risen to the opportunity including running back Jaylon Spears, tight end Logan Farrell, and linebacker Noah Chachere.

In today’s game, it is all about scoring points and the player that does that the most is touchdown scoring machine Jaylon Spears, who had five touchdowns alone in one game against Ponchatoula High School earlier this season. Louisiana Football Magazine’s recruiting specialist Lee Brecheen placed the Brother Martin running back on the preseason 1st Team All-South Louisiana Team after rushing for accounting for 1,000 all-purpose yards and 11 touchdowns as a junior. Luckily for Crusaders fans, Spears’ playing style reminds Brecheen of a certain running back who lead both his high school and college team to a championship.

“Jaylon Spears is the most underrated running back in the New Orleans area,” Brecheen said. “There are all types of running backs, but if you want a short, stocky, explosive running back kind of like Clyde Edwards-Helaire (Catholic High School/LSU/Kansas City Chiefs), that is the kind of player Jaylon is. Don’t be fooled by his height as he is only 5-9, 200 pounds as he is like a mini truck with speed. He has good vision and deceptively fast too.”

Although Spears has only received one offer from Louisiana College, it is clear that everybody that sees him play knows what he could do with the ball in his hands including his own teammate Logan Farrell, who blocks for him. Overall, Farrell believes the offensive unit is explosive because of the chemistry that he, Spears, and others show together.

“I think our offense is so explosive because of our closeness,” Farrell said. “We have been practicing and playing together on Friday nights for three years up front and all of our skill players work hard. Jaylon is awesome as a teammate because he cuts right off of our blocks, and we all trust him to get the yards we need. He is explosive and can be dangerous in open field or in the trenches with the line. All of our guys get the job done and we all are close like family.”

An underrated part of a Brother Martin offense that has averaged a high powered 43 points per game is because of the play of tight end Logan Farrell.

“I would say its that I can block inside and on the perimeter, catch, and I understand the game plan as well as my role just like Coach tells us,” Farrell said.

At 6-4, 213 pounds, he could do it all for the team whether it is blocking or catching passes from talented junior quarterback Garrett Mmahat.

“Logan Farrell was always a tall kid that could run,” Brecheen said. “Now, he has added good weight and has gotten a lot stronger. Tight ends aren’t featured in high school like in college or in the NFL, but he is a kid that is still going to put more weight on. I think he is a DI player, but smaller DI schools are going to offer him that don’t mind projections meaning he will need another 15 pounds, but it is better than what he needed a year ago instead of gaining another 30 pounds. He is starting to get where he needs to be in order to be a starting DI tight end as he runs well and starting to become a dominant blocker as well.” 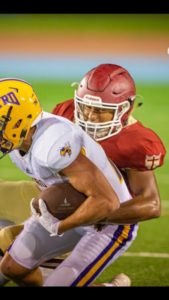 Farrell has been committed to better himself physically for the upcoming season, and it is now paying dividends.

“This offseason, I put on 30 pounds and gained speed,” Farrell said. “I play with a physical edge that I think most guys don’t have. Coach Bonis also puts us in the best opportunity to be successful.”

As of now, Farrell has received some interests from colleges because of his abilities and willingness to get better as a player.

“Arkansas Monticello offered me in September and Louisiana College before that,” Farrell said. “A few other coaches have contacted me showing interest.”

Somebody that is used to being around the college game is linebacker Noah Chachere, whose father Garret Chachere is a longtime college football coach that has been with several programs over the years.

“Noah is the son of a coach in Garret Chachere, who has been with Tulane, Cal, Arizona, Western Kentucky, etc.,” Brecheen said. “Noah has grown up eating and sleeping football so he knows the game. You could tell that because he had a pick six this year just based on instincts. At 6-2, 205 pounds with 4.7/40 speed, he can play at a Southland Conference school whether it would be walking on or getting a scholarship or he could also become a star D-II player. When it is all said and done, it would not be surprising if he goes into coaching.”

Even though Chachere has grown up wanting to become a sports agent, always being around a college coach has its advantages for the younger Chachere.

“It is great,” Noah Chachere said. “It allows me to ask questions, get coaching advice, and learning things that most kids don’t get at home.”

Noah will get a chance to learn more from his dad than most other years as his father took a year off coaching to see his son play his senior season.

“It means a lot because last year, he didn’t get to see to many of my games because he was coaching,” Noah Chachere said. “With him taking the year off, it’s great having him being able to watch my senior year.”

His father has chosen the right year to take off as the Crusaders have state championship aspirations. Not only the Crusaders’ undefeated season reflects it, but the confidence of this senior class also reflects it as well.

“Keep working hard and growing closer together as a family,” Farrell said. “We have to be able to trust in the guys around us and work everyday with a consistency of purpose. We have been so close for the past few years and we are ready to make the next step.”

With seniors like Noah Chachere, Logan Farrell, and Jaylon Spears leading the way, the Crusaders will be very dangerous heading towards playoff time.

Click the link below to check out Noah Chachere’s junior highlights:

Click the link below to check out Jaylon Spear’s junior highlights:

Click the link below to check out Logan Farrell’s highlights against Archbishop Rummel: