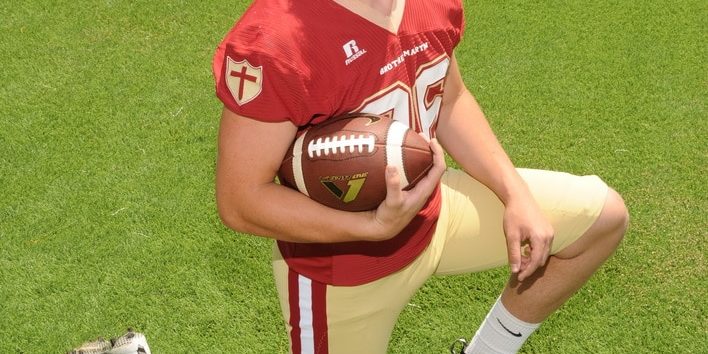 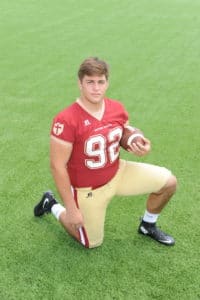 Over the last decade, the Brother Martin Crusaders have been one of the toughest teams to deal with in the always tough New Orleans Catholic league under the direction of Head Coach Mark Bonis. Over that span, there have been a lot of teams that were filled with DI talent such as the 2015 and 2016 teams, which featured DI signees such as Bruce Jordan Swilling (Georgia Tech), Tre Swilling (Georgia Tech), Irv Smith Jr. (Alabama), and Peyton Aucoin (Texas). This season, the Crusaders may have not had as many DI potential players, but what they did have in their senior class is a great class that played hard and well together. This senior class did a great job of guiding the ship in which was a young Brother Martin team and leading that team to a very respectable 7-5 record including a Division I first round playoff victory against Scotlandville before losing the very next round against the Archbishop Rummel Raiders. For Coach Bonis, it was a great season considering they were playing teams with more talent and they had to overcome adversity along the way.

“The senior class really did a great job,” Bonis said. “They had a lot of guys that really did not play a lot especially defensively. It was a close knit group and they were playing their best football towards the end of the season. They faced adversity losing our quarterback in the Holy Cross game. However, all the things we preach and talk about as far as our program and principles are concerned, I thought they lived up to our expectations. I am very proud of them and this is a great group of young men.”

So far, there have been no seniors that have signed to play football at the next level, but Louisiana Football Magazine’s recruiting guru Lee Brecheen believes that there are a couple of players in this group that could play at the next level.

“I think their defensive tackle Mack Brown can go I-AA,” Brecheen said. “At 6-0, 280 pounds, he is a late bloomer that could be a steal for a Nicholls State or a McNeese State.”

“Michael Clapp, who is the brother of Will Clapp (Brother Martin/LSU/New Orleans Saints) and the son of Tommy Clapp (LSU), could be a I-AA guy as a walk-on fullback at 6-1, 205 pounds,” Brecheen said.

“Brady Faust is a great slot receiver that is as tough as nails and has a 3.5 GPA in the classroom,” Brecheen said. “He could walk-on at the I-AA level or be a star at the D-II or D-III level if he wanted to.” 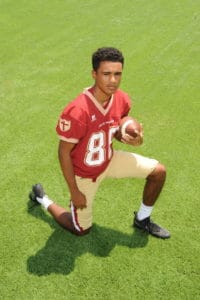 “Beau Ranlett, who plays linebacker at 5-11, 200 pounds, is another tough player that is a D-II guy that could also walk-on at the I-AA level,” Brecheen said.

“Defensive Tackle Akili Smith is another player that can play at the I-AA level at 6-1, 285 pounds,” Brecheen said.

“The player that has the most upside is Von Addison,” Brecheen said. “If he wants to, he can be great whether it be as an outside linebacker or as a free safety.”

“Javier Perez could also be a D-III receiver,” Brecheen said.

“Also, Brady’s brother Michael Sport Faust could be another I-AA walk-on or could even sign I-AA,” Brecheen said.

“There is Drew Martin, who was their senior quarterback that only played this year and got hurt in the last couple of games of the season,” Brecheen said. “He could be a D-III quarterback at 5-10, 180 pounds.”

“Finally, there is senior WR Carson Perez, who is 6-3, 180 pounds,” Brecheen said. “He is a late bloomer that could be a D-III guy. They just have a bunch of these blue collar guys that are going under the radar.” 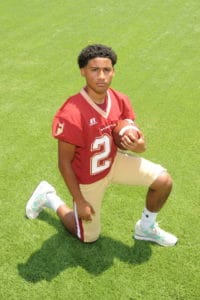 This is a tight knit group of players that have played with each other for a long time and would do whatever it takes for the guy next to them.

“I am going to miss the teammates that I have been with for five to six years along with the coaches that I have known since the seventh grade,” Michael Sport Faust said.

That’s why this year was so important not only for this group of seniors, but also to get the younger guys a sense of what goes on in the strong football program. Like many other teams, there have been a lot of ups and downs, but the most important thing was that the Crusaders finished strong and gave it their all.

“This season was like many other seasons,” Brown said. “We started off a little slow, but we picked up as soon as we hit district. We had a very stout defense that is by far one of the best run defenses in the state. We had a bunch of guys step up the challenge and fill in big roles that we were lacking and we really came together as a family. I believe that we should’ve gotten farther in the playoffs, but I am happy with the memories and friendships that I have made throughout the years.”

As far as what is up ahead, there are a couple of players with bright futures. Brady Faust, who was mentioned earlier, has had a great prep career as a wide receiver with 102 grabs for 1,606 yards and eight touchdowns. Although very productive as well as a great route runner, the reliable receiver also stands out in another sport so much so that he is committed to play for Southern Miss not on the gridiron, but on the diamond.

“I chose Southern Miss for baseball,” Brady Faust said. “I chose baseball over football because Southern Miss is the perfect place for me. Also, I think that I can be more successful at the next level in baseball.”

Brady’s brother Michael Faust has yet to receive a college offer, but he believes  that his punting skills can be useful for a college. With a punting average of 39 yards, the All-District punter has the leg to already go with the athleticism as a defensive back to be a wild card. 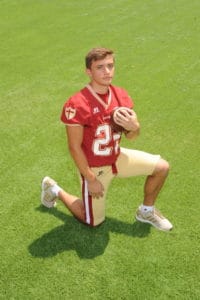 “My coaches say that I am coachable,” Michael Faust said. “I am competitive and hate to lose. I believe I am a quick thinker on defense and usually have a good idea what play is coming based on the types of formations and players in the game.”

Still, there are some others that have received football offers and are looking forward to continue wearing the helmet and shoulder pads.

Case in point, Beau Ranlett has not always been the biggest at 5-11, 200 pounds, but what he has shown on the defensive side of the football is quickness and play recognition. The stats back it up as Ranlett was a tackling machine with 115 tackles, 15 tackles for loss, six sacks, and a blocked punt not to mention he also holds a record for most tackles in a single game with 25 in his last game against Rummel. That has attracted schools such as Arkansas Monticello, Millsaps, and Louisiana College, which were schools that offered along with D-III school Sewanee, which has shown interest. Just like at Brother Martin, Ranlett wants to transition his talents not only on the field, but in the classroom to the next level.

“In college, I want to take all my football life lessons about going through adversity and applying it to my studies,” Ranlett said.

Defensive tackles Mack Brown and Akili Smith have played big roles in the Crusaders’ tough nosed run defense. Their hard work has paid off as well with Brown receiving an offer from Massachusetts Maritime Academy and Smith receiving offers from Wabash, Millsaps, and Sewanee College. Those are just some of the players to have at least received interest to play at the next level. What the Crusaders have done is not only build strong football players on the field, but also prepare them for what is to come later in life.