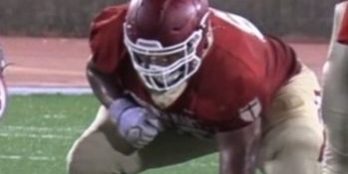 The offensive line is the most important part of any team. They can be the backbone of an offensive attack and leaders of a potent unit. Their size and athleticism make them dangerous at the line of scrimmage and down the field as space-clearing battering rams. Few players exemplify this as much as the senior offensive line duo from Brother Martin High School in Michael Braud and Jayson Montgomery-Scott. The two close friends have played football together since they were young and have become a dominant blocking pair for Brother Martin. Breaux and Scott demonstrate leadership both on and off the field. 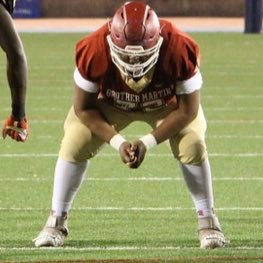 The 6’4, 310 pound Montgomery-Scott and the 6’3, 340 pound Braud make for an imposing force on a Brother Martin offensive line that is predicated on size and power; two things that Jayson and Michael both have in spades. When asked about the biggest strength in their games, both responded with a consistent answer, “Power.” This power extends from the field into the weight room, where both men lift monstrous numbers in both the bench press and the squat. Montgomery-Scott maxes out on the bench press at 345 pounds and lifts an astounding 530 in the squat. Braud also puts up impressive numbers, lifting 305 in the bench press and squatting an amazing 525 pounds.

Being an offensive lineman takes far more than power though. Great footwork and athleticism are required and are something both Braud and Montgomery-Scott pride themselves in having. “My footwork is everything in my position,” Braud said. “Sometimes I have to go out to get a Wide 7 technique and he is more athletic than me, so footwork is a big thing.” Jayson was quoted as saying, “My biggest goal is to try and perfect my technique. I also look to finish blocks by putting guys in the ground, or sealing off my block.”

This combination of power and athleticism lead to comparisons with some of the best offensive linemen to play the game. When asked about NFL players that helped shape their gameplay, Jayson compared his mixture of power and athletic ability to Dallas Cowboys legend and NFL Hall of Fame Guard Larry Allen, while Michael compared his game to 8-time Pro Bowler and current San Francisco 49ers Left Tackle Trent Williams. Two incredible comparisons for two remarkable athletes.

While their impact is definitely felt on the field, their impact in the classroom, and as team leaders, is arguably as impactful. Both Montgomery-Scott and Braud boast high GPAs, as well as an ability to coach up the younger players on the team. Braud was quoted saying, “There’re some young guys that I see potential in… and I try to coach them up and tell them not to be nervous, and play their best game, no matter their role.”

These leadership qualities make players like Braud and Montgomery-Scott special to their teammates and coaches, and they will look to continue that impact with Michael’s commitment to Arkansas-Monticello and Jayson’s to the Air Force Academy. Both look to make incredible impacts on their programs in the future, and for Brother Martin this season.

Click the link below to check out Michael Braud’s junior highlights:

Click the link below to check out Jayson Montgomery Scott’s junior highlights: