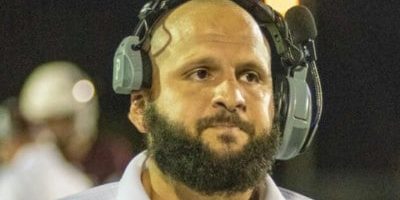 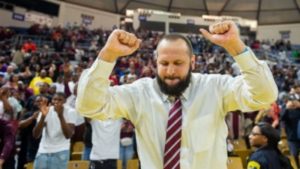 Breaux Bridge Head Football Coach Chad Pourciau also serves double duty as head basketball coach. Here he is after he leads the basketball team to a Class 4A state championship victory. (Photo provided by Chad Purciau and courtesy of the Advocate)

Usually, a lot of head coaches take on athletic director role or a teacher role as another job for their perspective school. Then, there are some coaches that coach other teams, but there are few coaches that take on the role of head coach for two separate sports. Well, one of those coaches that have embraced coaching multiple sports is current Breaux Bridge High School Head Football and Basketball Coach Chad Pourciau.

For a lot of others, coaching two different sports may be a little too much to handle, but for Pourciau, all he knows is coaching and that is the one thing that he wants to do no matter how many sports he coaches. In fact, the versatile coach did not know what else he would do if it was not for coaching as long as he could remember.

“It’s all I really want to do,” Pourciau said. “All I have done in my whole life is watch sports.”

Pourciau not only watched sports, but he was pretty involved in athletics as both a high school and college student.

“I played both football and basketball in high school at New Iberia Senior High,” Pourciau said. “I walked on to play football at Northwestern State, but only played for a year in order to put my focus into coaching.”

After Pourciau graduated from Northwestern State, he knew exactly what he was going to do.

“I started to coach at Breaux Bridge Junior High,” Pourciau said. “I originally was worried about getting a job, but took a job to coach sports as well as teach P.E. there. I was there for about three years until I went home to coach at New Iberia as an assistant basketball coach and football coach. Then, after three years, I got a call from Breaux Bridge High School and they offered me a job to coach primarily because I coached a lot of those kids when they were in junior high.”

After his first two years as both an assistant football and basketball coach, Pourciau finally got his first shot of being a head coach when he was named the head of the basketball program three years ago. The then 26 year old had not only taken advantage of that shot, but he has also thrived in that sport as well. Quickly, the Tigers became one of the best basketball programs in the state. In only a three year period, the Tigers have had a combined record of 93-44 including a Class 4A state championship this past season. Pourciau has turned around a basketball team that won only eight games the season he took it over.

However, soon as he just taken over the basketball program and turned it around, he would have to do the same thing with the football program as Pourciau would take over for Terry Martin, who left Breaux Bridge with a 9-12 overall record with two playoff appearances, in order to become the head football coach at Loreauville High School. Just like the same way with basketball, Pourciau knew that his kids would know what to expect from him as he was already on the coaching staff.

“It happened so late when Coach Martin left for Loreauville,” Pourciau said. “The school decided to promote within the school and chose me to take over as head coach. It was so late that I pretty much kept everything similar. The scheme and the terminology was the same, and we kept things simple. The only thing different was that there was a difference voice saying it.”

Now, at 30 years old, Pourciau would be in charge of two athletic programs at the 4A level. In his first season of double duty, Pourciau showed what kind of programs he could lead. Earlier, it was mentioned that he led the basketball team to a state championship, but in his first year as the football coach, the Tigers did some pretty nice things.

“It was a pretty good year considering the things that transpired going 8-4 on the season,” Pourciau said. “We broke through after losing in the first round of the playoffs in the last couple of years and won a playoff game against Lutcher in overtime. We did lose in the second round to Warren Easton, but with the help of a really good senior class, it was a successful season.”

After going 8-4 in one season, there is a lot of expectations now that Coach Pourciau will have a full off-season to prep his team. The Tigers may lose a good senior class, but they only lose one player that will be playing college football and that is DT Jontrell Steward, who will be playing junior college in Dodge City, Kansas. According to Coach Pourciau, there is plenty of talent for the Tigers to breakthrough even more in 2019.

“The off-season has been really good for us so far,”Pourciau said. “There are a couple of guys that we are going to look to have great seasons. First, there is WR Dartravien Girod, who has received offers from ULM and ULL. I am sure he will be getting other offers once the season progresses. He doesn’t necessarily beat you with his size and speed, but he is a playmaker and a definition of a football player. We will also rely on our running back Kavion Martin, who ran for 1,000 yards last season. He is a tough nosed player that can both run and catch. There is DT Trevonte Sylvester, who also was the starting center for our state championship basketball team, and finally, Tyrese Martin, who maybe undersized, but is a guy that can play on the defensive side of the football in college. He had 100 tackles for us last season. Those are just some of the players that we will be looking to for this year.”

Right now, Pourciau is getting used to the transition between coaching each sport.

“It is easy here because a lot of guys play both sports,” Pourciau said. “The seasons overlap and we really don’t start basketball until the football season is over. It really works well.”

Despite the two totally different sports, Pourciau’s coaching style does not change.

“I don’t sugarcoat things,” Pourciau said. “I am very intense. I may yell and holler a lot, but in the end, I treat them all the same. I have a lot of passion, but I treat all of them with love. I just have a will to win.”

That will to win mentality makes Pourciau one of the hottest, young coaches in the state of Louisiana not only in basketball, but in football as well.