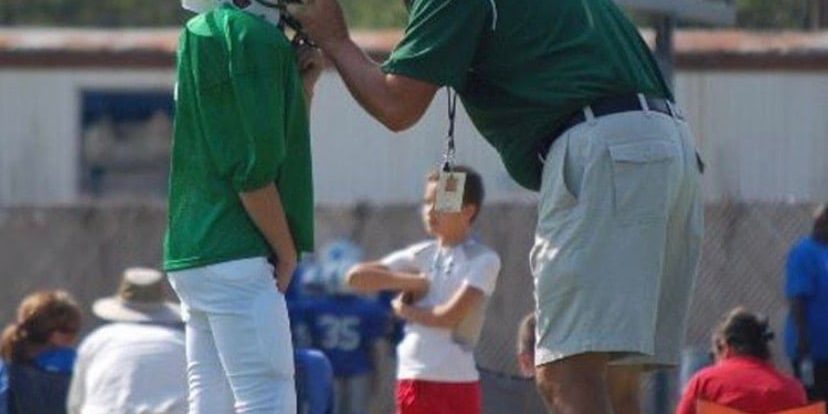 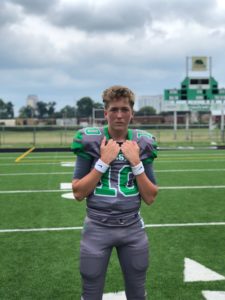 Sports have always been common in the Beeson family. David Beeson was a common name around the Bossier area. Coach Beeson, as he was called by his peers, played a prominent role in Bossier High School athletics since 2008. Whether it is coaching baseball, wrestling, or football, Coach Beeson made sure to help the student athletes. Not only did Beeson’s involvement with multiple sports spread across the school community, but it spread across the rest of his family. One of Beeson’s sons Coty has also caught the coaching bug by volunteering as a non-faculty coach at Bossier High School. While one son has been coaching, the other son named Coleman has been enjoying playing multiple sports.

“I am a three sport athlete,” Coleman said. “I play football, baseball, and soccer.”

There are a lot of athletes that play different sports, but do not excel at each one. Well, that is not the case for Coleman. As both a baseball and soccer player, he was an All-District selection. As for football, Coleman entered his junior season becoming the Bearkats’ starting quarterback.

“I have always been the best at baseball,” Coleman said. “I play pitcher, catcher, and shortstop, but I would love the opportunity to play any of those three sports in college.”

Since Coleman was able to play multiple of sports, he, then, got the opportunity to play for his father. Even though Coach Beeson got to coach his son in pee wee football as well as baseball, he still made sure not to show any favoritism.

“It was pretty cool having your dad as a coach, but believe it or not, it was kind of annoying sometimes because I had to listen to him a lot as both a dad and as a coach,” Coleman said. “He did know what he was saying, but he definitely did not show any favoritism.” 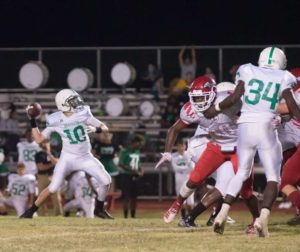 Bossier High School QB Coleman Beeson had a successful season in his first year as a starting quarterback by throwing for over 700 yards and 10 TDs in a Wing T offense. (Photo provided by Coleman Beeson)

That was the mark of a good coach. Even though Coach Beeson coached his son before, last season would be the first time that he would coach his son as the starting quarterback with Coach Beeson being the defensive coordinator. It seemed that 2019 would be a special season for the both of them, but unfortunately, on the morning of Monday, July 29th, 2019, the unthinkable happened. At the young age of 57 years old, Coach Beeson passed away unexpectedly due to pulmonary embolism, which occurs when one or more arteries in the lungs become blocked by a blood clot.

“Yeah, it was really unexpected, and we didn’t really know anything,” Coleman said. “It just came out of nowhere. We were looking into the season with him becoming our defensive coordinator, and we just expecting to have a normal season.”

The whole school community was stunned by the news as not only did Bossier High School lose a coach or a teacher, but the institution lost an entire void that could not be replaced or filled.

“The news hit hard to everybody,” Coleman said. “He was the coach that everybody got along with. He was the guy that everybody went to or if our head coach Coach Michael Concilio needed any advice, he would be the first person he would go to.”

Despite the loss of his father, Coleman knew that it was only right to go out and play the upcoming season like his father would have wanted him to. Throughout the season, the Bearkats would make sure to pay respect to their fallen coach.

“That first home game was hard,” Coleman said. “Also, homecoming was pretty tough as well when we wore the gray uniforms because he paid for those uniforms and was the reason that we got those uniforms.”

Playing inspired for Coach Beeson, the team decided to dedicate the season in his memory as the coaches and the fans constantly wore “Team Beeson” shirts throughout the season. That inspiration along with “help” along the help guided the Bearkats to its first 4-0 start in over 15 seasons. The Bearkats had an incredible 7-4 season with the late defensive coordinator’s son Coleman leading the way under center. Even though the Bearkats fell in the first round of the Class 3A playoffs to the Kaplan Pirates, it was a season to remember as the program won a combined six games the previous three seasons. Despite not having his father there physically along with him, there were plenty of instances that Coleman knew that his father was right beside him on Friday nights.

“At the beginning of the season when we were on a winning streak, it was almost like he was right there with me,” Coleman said. “I could almost hear him chuckling when we made a big play, but the North Webster game was when I really felt like he was there with us because we were battling back and forth. Every time that I got hit, I could just hear him yelling at me to get up and that I was okay.”

Last season as a first year starter, Coleman Beeson played great despite the circumstances. He even threw for over 700 yards and 10 touchdowns in a heavy running Wing T offense. Despite the success on the field, Coleman knows that he could be better in 2020.

“I don’t think I could have done as good as I have done last year,” Coleman said. “I would probably grade myself a C because there are a couple of times that I didn’t read the play right or if I just made a bad pass when things could have been different. I could have made better decisions considering the talented running backs that I had in the backfield.”

Just like a prototypical coach’s son would evaluate the negative things that he could improve on, he has also tried to use this time in quarantine to reflect on this previous year, which was filled with ups and downs as well as how he can rebound with an even stronger senior season.

“Well, when they first said that school was cancelled, I was kind of happy because I thought baseball would still be going on, but once, they cancelled baseball, I was really upset about it,” Coleman said. “Now, I am just focused on summer baseball as well as football this upcoming season. I have been working out in the house every day just trying to get ready as well as get in shape.”

Getting a chance to reflect on a crazy year that was beyond expectations for Coleman both good and bad, Coleman would often sit down and just get the chance to talk to his dad one on one like he would do in the past.

“I just want to thank him for everything that he has done to get me where I am at, and to also push me to keep on going,” Coleman said.

Not only Coleman Beeson will have what it takes both physically and mentally for the upcoming season, but he will also have a father that will always be there to encourage him when things are good and when things are tough. That is only the Beeson way to do things.