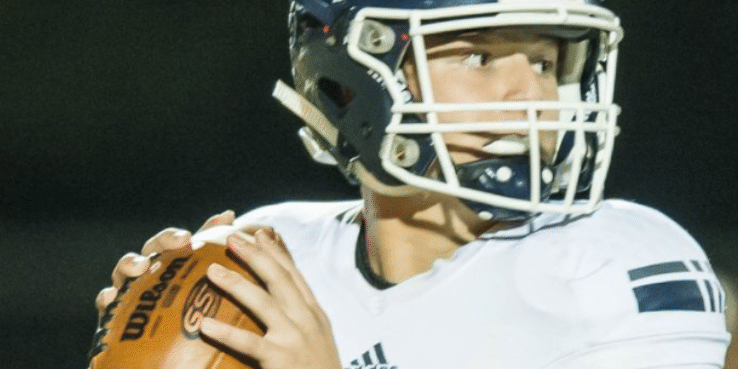 Early on in the 2020 season, perhaps, no quarterback has impressed our recruiting guru Lee Brecheen the most in terms of his improvement from his freshman season to the start of his senior season than Ascension Episcopal High School senior quarterback Cole Simon.

“Cole Simon has been starting since his freshman season,” Brecheen said. “He really came on at an early age, which is not typical. He’s been a big leader for the team, but he has also made a huge growth from his freshman to his upcoming senior year. He has actually grown a lot as he is now a true 6-0, 180 pounds compared to when he was 5-10 to 5-11 the previous three seasons. Watching him play this year, his arm is super strong as he can throw the ball up to 60 yards in the air. That is very impressive and when you are not 6-2 or 6-3, something has to set you apart, and I believe his arm and his feet is what sets him apart. If he was timed, he could probably run in the 4.55 to 4.6 range in the 40. If needed, he could be an 800 yard rusher for the team, but knowing how important he is to the team, he will not run as much. I think he has really improved from originally being a D-II or D-III guy to being a guy that can play for a I-AA or a small DI program.”

As of now, the Ascension Episcopal High School four year starting quarterback is waiting for that opportunity to play at a DI or I-AA program. In fact, he is just trying to get an offer period.

“I have still yet to get an offer, but today, Louisiana College’s recruiter came and talked to me so I am hoping on something happening there,” Simon said.

Like Brecheen mentioned earlier, Simon does not physically look the part as other major DI quarterback recruits that are 6-3 or taller, but he does have a lot of abilities that college football programs can use.

“I think some of my best strengths as a quarterback are the ways I can extend plays when everything goes bad, and the way I use my feet,” Simon said.

One of the various improvements Simon has made already one game into his senior season is his arm strength, and it is because of four years of experience that has given him the confidence to use his arm fully.

“I think one of the main reasons for my improvement was becoming more confident and really getting to know my receivers tendencies and things like that,” Simon said.

It also helps when your team is winning games as well. For Simon and the Ascension Episcopal Gators, the program is now 2-0 to start the early season.

“I think we had a great start to the season this year,” Simon said. “With all the COVID-19 stuff, it’s really messed us up, but we have overcome that and realized that pretty much every second counts this year since we only have eight games. We aren’t here to mess around this year, and the big win over Catholic High (New Iberia) was a big thing for us. Ever since my freshman year, we have never beaten them, and we knew that this year was the year to do it so we all went out to that game with a chip on our shoulder and we came out on top.”

Simon is expecting to come out on top in a lot of games this season as well as set goals in throwing for over 2,000 yards and rushing for 1,000 yards in 2020. Because of his dual threat ability, Brecheen has put Simon on the 1st Team All-South Louisiana Team as an athlete and not as a quarterback. For Simon, it does not matter what position he plays as long as he gets an opportunity to showcase his skills.

“Playing quarterback in college would be awesome, but my coaches have always told me I was an athlete, and I feel that if it was needed, I could be moved around the field and excel in the position they put me at.”

Not only can Simon excel at almost any position, but he also excels at different sports as well being a multiple sport athlete playing baseball at both shortstop and second base. Throwing a baseball has also helped his ever growing confidence in being able to throw a football.

Being that i got playing time as an 8th grader on varsity baseball has taught me a lot through the years,” Simon said. “I feel that since I did that, it has taught me how to calm down in the games and really just play my game as well as not get nervous in big situations. Things like that.”

Besides being a two sport athlete, Simon lets off steam by being heavily involved in the outdoors.

“I’m an avid outdoorsman,” Simon said. “I love to duck hunt. I’ve been doing it my whole life. I’ve recently picked up deer hunting, and I’ve always fished ever since I was a little kid so hunting and fishing has been with me since I was little just like sports.”

Just like hunting and fishing, Simon wants to be involved with the sport of football as long as he can even if it means playing for his favorite team.

“LSU has always been the school for my family,” Simon said. “Just growing up watching them play has had a big impact on me and in me wanting to play there. It’s been my life long dream to go out there on Saturdays in Tiger Stadium with the best crowd in college football cheering me on.”

For now, the future Mechanical Engineering college student is focused on finding the best program that fits him both athletically and academically.

Whatever it takes, Simon is willing to take a chance for a program and a coach that exhibits that much confidence in him.

“I think coaches should take a chance with me because I am very coachable, and I can do what they need me to do and play wherever they need me to play,” Simon said. “I’m a team player, and I want what’s best for the team not just myself. I am also very dedicated to everything I do and strive to do my best in all that I do.”

If his improvement each year in high school tells you anything, Cole Simon is willing to do what it takes to get his opportunity.

Click the link below to check out Cole Simon’s junior highlights: