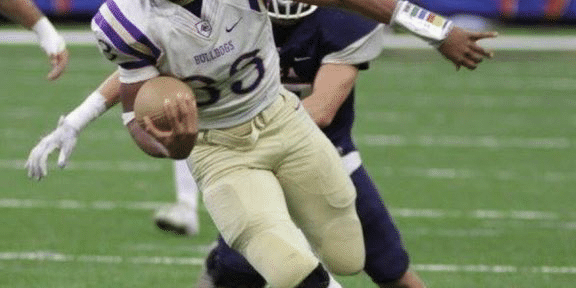 Jai Williams is a 5-10, 175 pound senior running back at Ascension Catholic High School in Donaldsonville, LA. Williams has football in his bloodline as his father Germaine “Juice” Williams set records at Ascension Catholic and also played at LSU. Mr. Williams broke Louisiana high school rushing record in 1989 with 8,048 yards. His son Jai is still on the path to defeat his dad with having a current total of 7,100 rushing career yards, and has actually defeated his father’s record for having 101 touchdowns in Ascension Catholic, which is the most in history.

Jai’s record setting performances have led his team to two Division IV state championship game appearances. This season, the Bulldogs have just completed their regular season with an undefeated record. Jai is known for giving 100% during every game, keeping a high momentum, and not backing down easily. Currently, Williams has an offer from Nicholls State and is looking forward to receiving more. He has made the 1st Team All-South Louisiana Team for Louisiana Football Magazine, was named a two time All-State selection, and was named the Sportsline Player of the Week on two occasions.

Click the link below to check out Jai Williams’s highlights: