After Rough First Season, The Church Academy Crusaders Are On The Way Up In Year Two Under Head Coach Marcus Randall 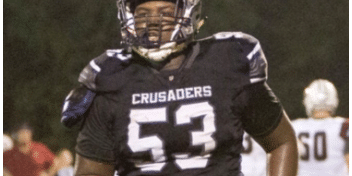 After Rough First Season, The Church Academy Crusaders Are On The Way Up In Year Two Under Head Coach Marcus Randall

The Church Academy Crusaders are an upcoming program that are trying to get to new heights especially with a big name hire this past off-season. At the beginning of the year, the Crusaders hired former LSU quarterback and Southern Lab Head Coach Marcus Randall to lead the 2A program. Randall has had a lot of success not only as a player most notably throwing the famous “Bluegrass Miracle” touchdown pass against Kentucky, but he also had some success leading the Kittens to two state championship titles as a coach. Randall hopes to bring a new winning tradition to the school formerly known as Christian Life Academy. The first year was a rough one for Coach Randall and the Crusaders as the team failed to win a game in 2018 with an 0-10 record. A big reason for the struggles has been a lack of depth at the 2A level. However, there are some talented players on the roster.

As far as the seniors go, there is one player that is capable of not only playing at the DI level, but even beyond. That player is senior DT Kelvin Smith. At the beginning of the season, Smith was really high on Louisiana Football Magazine’s recruiting specialist Lee Brecheen’s radar as he was selected on the preseason second team All-South Louisiana team. Now, after the season is over, Brecheen’s thoughts have not changed on the 6-2, 290 pound defensive tackle.

“I think Kelvin Smith is a SEC player,” Brecheen said. “He can play offensive guard or defensive tackle. I guess being where a lot of college coaches don’t go to the team’s games has hurt him, but he is about 6-3, 290 to 300 pounds, and he runs like he is only 250 pounds. I think he is legit. There is a difference of being a DI caliber player and being a SEC caliber player. I believe that Kelvin can play in the SEC.”

Obviously, there is a lot of high praise from Brecheen, who has seen the McKinley High School transfer play on film. However, Smith is still searching to play at the next level.

Smith was a player that could dominate games on both lines of scrimmage, and would be a huge loss for the Crusaders. This upcoming season, there will be some positives and negatives like so many other teams, but for Coach Randall and his staff, the positives will outweigh the negatives.

They will lose Smith on the offensive and defensive line, but the good news is that the Crusaders will return some very talented skill position players including ATH Caleb Kibodi, who is the younger brother of Texas A&M running back Jacob Kibodi.

Those players will be counted on heavily during the off-season and if the Crusaders can build on some depth, this could be one of the most improved teams for the 2019 season.