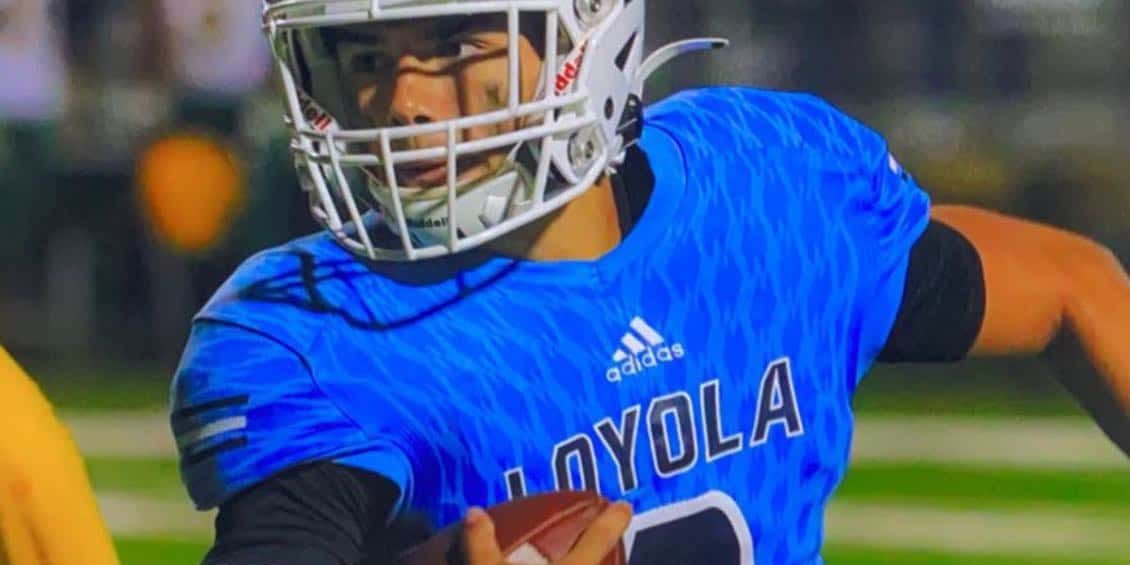 Jacob Lafitte, Senior Quarterback for Loyola College Prep in Shreveport, already achieved one of his goals for his senior campaign as he set several school records in a great performance against Logansport, tallying 372 yards in the win last Friday. Jacob had this to say about his dominant game, “I was pleased with how I played. I don’t ever want to sit back and say that I had a perfect game, or the game of a lifetime, because I missed guys on multiple occasions, and had plays I wish I could have back.”

Even if he downplays his personal game, Lafitte did not hesitate to praise his team and their help in his amazing, record-setting performance, saying, “As a team, I couldn’t be happier with how we played offensively. I think we fought hard up front, had really good blocking from all our guys every play. We could definitely clean up a lot, but it was good having key players making big plays all night long on both sides of the ball!”

Jacob credits Kansas City Chiefs Quarterback Patrick Mahomes as his favorite NFL player and a player that he tries to model his game after. When asked about which parts of Mahomes’ game he takes the most influence from, he credited Mahomes’ ability to keep plays alive. “The biggest thing I have taken from him (Mahomes) is his ability to move in the pocket, escape the pocket when needed, and make big plays on the run. I watch how he keeps his eyes down the field at all times no matter what pressure he is under, and this makes for a lot of game changing plays.”

Laffite showed this Mahomes-esque awareness in a play that he credits for getting his team going, “Tray Taylor had a 5 yard out early in the game and instead of staying in the pocket and throwing it away, I rolled to his side after seeing the safety come down, gave him the go signal, and he stopped on a dime, turned up the field, and I hit him over the top for out first score of the night, and that really got things going.”

The 2020 All-District selection threw for 40 touchdowns, ran for 10 in his past two seasons, and is building on those accolades now in his senior year. Jacob is not only dominant on the football field, but in the weight room as well with stats of 235 in the bench press, 245 in the power clean, and 320 in the squat. He also boasts a 36 inch vertical and a 4.7/40.

When asked about his game plan and how he approached the game, Lafitte said, “Going into any game we play, there are obviously plays that we know will be good against whatever defense we are playing that week. We knew that we would have success up the middle and with plays where we read the edge rusher. We tried to make sure that no matter what they chose to do, it would be wrong.” Lafitte’s athleticism makes him dangerous both through the air and on the ground, but his mentality and work ethic is what really sets him apart from other quarterbacks.

Jacob also talked about his confidence and work ethic entering the game, “I couldn’t be anymore confident in myself and my team. All I try to do every week is be a good example for my teammates and put everything on the line every play. I told coaches, family members, and friends before the season that I was going to play every snap this season like my life depended on it, and I will not break that promise,” Laffite said, “Whether it is on offense, defense, or special teams, nobody is going to work harder or play harder than me. I just feel I owe it to my parents, teammates, coaches, and myself.”

Jacob looks to build on this performance against Northwood this week and continue to lead his Loyola College Prep teammates this season.