After Coming Off A Division I State Championship, Catholic High’s Biggest Challenge is to Avoid Complacency And Go For A Repeat 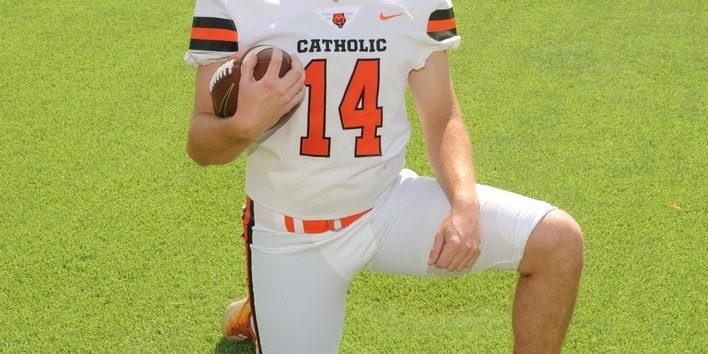 After Coming Off A Division I State Championship, Catholic High’s Biggest Challenge is to Avoid Complacency And Go For A Repeat

The Catholic High School Bears had a young team last season so it was a surprise when they came away with the Division I state title. Now, the Bears head into the 2018 season with a veteran offense and a young, but talented, defense.

The offense is led by senior quarterback Cameron Dartez. Dartez was instrumental in the Bears’ playoff run last season. Some teams may treat the offseason different after a championship, but Dartez and the Bears did not.

“This offseason was focused on avoiding complacency and staying hungry,” Dartez said. 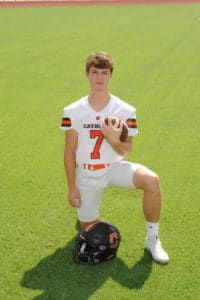 Catholic High senior WR Forrest Roy, who is known for making the game winning catch last season against Parkview Baptist in Week 1, is looking for many more highlight reel catches this season. (Property of LAFM)

The team became closer as well and that will help them be successful during the season.

“When we come together and play as a team is when we are hard to stop,” he added.

“I love his competitive edge,” Dartez said. “He is extremely passionate about the game.”

Studying Mayfield shows when Dartez is on the field. That is why Louisiana Football Magazines own recruiting specialist Lee Brecheen is so high on him.

“Dartez was one of the main reasons Catholic beat John Curtis in the Dome last season,” Brecheen said. “He is a leader, has good feet in the pocket, a good arm, and runs the offense to perfection.”

Brecheen also believes that he can be a good college quarterback.

“Cameron can play college football,” Brecheen added. “A school just has to take a chance on him with him only being 6-0, 195 pounds.”

Playmakers such as Forrest Roy at wide receiver make Dartez’s job easier. If it were not for Roy, Catholic would have lost to Parkview Baptist last season in Week 1. Dartez lofted a ball up to Roy in the corner of the end zone and he came down with it as time expired to win the game.

“It was a great feeling to be able to contribute in a big win,” Roy said of the game winning catch against Parkview. “It was great being able to celebrate with my team and our fans afterward.”

Roy watches film on Michael Thomas (Ohio State/New Orleans Saints) and Adam Thielen (Minnesota State University/Minnesota Vikings) to picks up things to add to his game. The knowledge picked up from the film show in his game.

“My strengths are my route running and blocking,” Roy said. “I also have great knowledge of the game.”

One of the other weapons on offense is TE Brandon Hubicz. He is a physical tight end that was raised in a football household. His father Jim Hubicz was an All-SEC offensive lineman at LSU from 1986 to 1989 and he started working with Brandon at a young age.

“I still remember, as a kid, my dad would always work with me on football or working out,” Hubicz said. “My schedule was very regimented and it was frustrating because all my friends would be hanging out on the weekends, but that was when I got after it.”

Those days tough days as a kid formed Hubicz into the football player that he is today and he gives his dad credit for that.

“He always loved to challenge me to see where I was mentally and I thank him everyday because without him I wouldn’t be the man I am today,” Hubicz said.

People are recognizing the work that Hubicz put in and it shows with offers from New Mexico State, Mississippi Valley, Navy, and interest from Ole Miss, ULL, and Western Kentucky. The hard work is also seen by Brecheen.

“Brandon Hubicz is an extremely athletic player at 6-3, 235 pounds,” Brecheen said. “He is what I call an advanced blocker. He blocks better than most high school tight ends.”

Brecheen believes that Hubicz will move up recruiting boards fast this season.

The offensive line is led by senior tackle Truett Bankston. Bankston believes the offense will be tough and have a successful year. 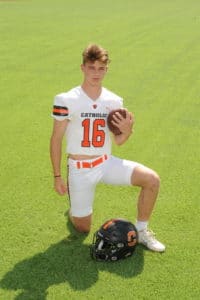 Catholic High senior FS Jonathan Mestayer has all the tools to be a big time player in the backhalf of a defense. (Property of LAFM)

“I expect us to be able to fight through adversity in our season and play tough at the line,” Bankston said.

“Truett started to play last season and this is his year to show that he can be a dominant lineman,” Brecheen said. “He can go D-I if he has a great season.” 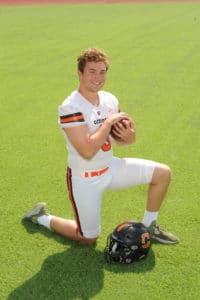 Catholic High senior DE Elijah Reames was one of the star playmakers on arguably the hottest defense in the state at the end of the season. (Property of LAFM)

The Bears defense is led by seniors Jonathan Mestayer and Elijah Reames. Reames is a 6-3, 245 pound defensive end and has the ability to play at the D-I level.

“This guy is strong as an ox, mean, and has this great swing move off the edge,” Brecheen said of Reames. “I think he is a D-I talent and shame on those who do not think the same.”

Reames’ physicality rubs off onto the rest of the defense.

“The strength of our defense is its physicality and we expect to be lights out,” Reames said.  “The coaches do a great job of helping us get to where we need to be as a whole.”

Mestayer will be the leader for the defensive backs. He likes how the secondary looks and believes they will play a major role in this year’s defense.

“We are all seniors and have some really good playmaking ability,” Mestayer said. “I want to be a leader for this group this year.”

Mestayer is on the smaller side when it comes to safeties at 6-1, 180 pounds, but is expected to fill out and be a good player at the next level.

“The kid can play the game,” Brecheen said. “He is a frightening hitter and reads everything. That is Craig Steltz (Archbishop Rummel/LSU/Chicago Bears) to me.”

Catholic may not return many players from last season’s championship team, but with the guys they have playing at their full potential, there is no doubt that they can be competing for a state title at the end of the 2018 season.