After 25 Years At Episcopal, Head Coach Travis Bourgeois Reflects On The Past And Looks Forward To The Future 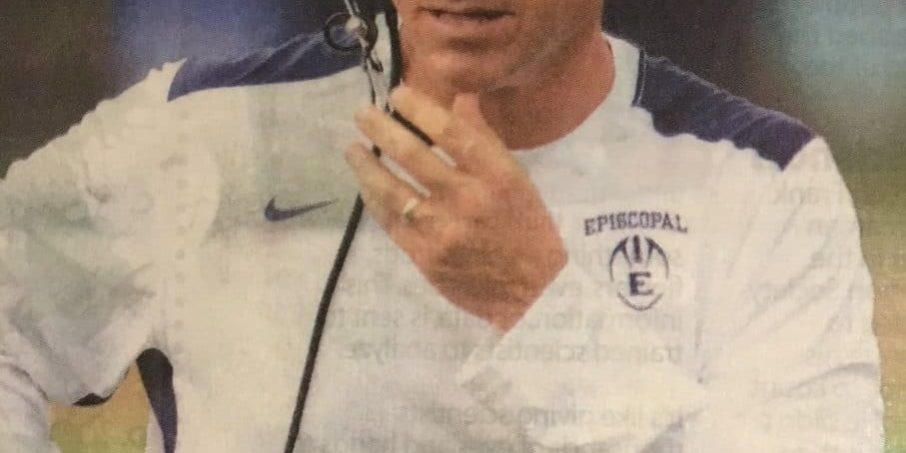 After 25 Years At Episcopal, Head Coach Travis Bourgeois Reflects On The Past And Looks Forward To The Future

For the past 25 years, the one name that has been the most synonymous with Episcopal High School athletics is current Episcopal football and baseball Head Coach Travis Bourgeois. For Bourgeois, originally, it did not matter what he was going to do, but he knew that he would always be involved with sports.

“I feel like I was born to be a part of a team sport,” Bourgeois said. “My parents always told me to be active and playing sports was something to do. Coaching has always been a part of me. My dad was my first coach. He helped coach me when I was playing little league. My uncle was a coach and my brother also got into coaching. Also, my high school coaches instilled in me the passion for coaching. I knew it was something that I was going to do.”

As a youngster, there was no off-season for Bourgeois as he participated in four different sports during his high school career at Ascension Catholic High School including football, baseball, basketball, and track, but it was the sport of baseball that was Bourgeois’ calling card.

“I first played junior college baseball at Pratt Community College along with my brother,” Bourgeois said. “Then, after I graduated with Pratt, I enrolled at UAB (University of Alabama Birmingham) and played baseball there.”

After his baseball playing days were over, Bourgeois knew immediately what to do and that was apply for a coaching job. Luckily, a very familiar face was in charge of the football program at Episcopal High School.

“It was my high school head football coach Steve Baronich that offered me a job at Episcopal,” Bourgeois said. “I am very thankful that he gave me an opportunity almost 25 years ago to come coach and now, all those years later, I am still there.”

After serving his first couple of years as an assistant coach, Bourgeois got his first head coaching opportunity as the Episcopal football coach in 2000. However, things did not go easy in Bourgeois’ first season.

“In my first year, we went 0-10,” Bourgeois said. “Even though that team went 0-10, that team played hard and established what we would become in the future seasons.”

It did not take long after that for Bourgeois to establish the Knights as a consistent program.

“The next season, we went 5-5,” Bourgeois said. “In the following year after having to win in Week 10 to get in the playoffs, we were able to play in the semifinals. In the first round, we had to go to Springhill after they made the finals the previous season. They were the favorites to win, but we pulled the upset. Then, we were able to defeat Oakdale and Newman respectively before losing to Iota in the semifinals. To go from 0-10 to being one game away from the Superdome in only three seasons was incredible in its self.”

“The most talented team was in 2011,” Bourgeois said. “That team went undefeated at 10-0 and won district. In the end, we lost to Winnfield in the quarterfinals. In the next season in 2012, we made the semifinals once again.”

Like a lot of other coaches, Bourgeois tried to stay consistent with his message no matter what the situation was with the team and how talented the team was.

“All of these teams have exemplified what Episcopal was all about,” Bourgeois said. “Each team has their own identity. I would always tell the seniors that this is your team and that it is up to them to control what type of season it was going to be. Every year, we continue to build and continue to get better.”

Being at Episcopal so long, every now and then, there would be special players that would come to the program not to ignore. According to Bourgeois, some of these names have made what the program is today.

“On the 2002 semifinal team, there was RB Ladd Lagendre, LB Brent Cobb, and center Collin Toney,” Bourgeois said. “They were the leaders of that team. There was also Turner Graham, who was an All-State linebacker from the 2012 semifinal team, center T.R. Clausen, and RB Cam Dumas, who made All-State in 2017. As far as other great players that I coached and played at the next level, there was RB Jared Rogers (Army), RB Mike Henry (Nicholls State), DL Tylor Harris (Wake Forest/Seattle Seahawks), RB Caden Dickinson (Rhodes College), and RB TJ Wisham (ULL).”

“Before Brian Bridgewater played basketball at LSU, he played football one year for us at Episcopal as a wide receiver,” Bourgeois said. “For one year, I got to see his size and athleticism. Another once in a lifetime player that played under me was RB Clement Mubungirwa, but he was ineligible to play for his senior year because he was past the age restriction.”

Bourgeois has seen his share of very talented players come and go through the years. The same would be said for this upcoming season as the longtime Episcopal coach would have to replace two runningbacks that accounted for a combined 2,700 total yards as well as 30 touchdowns in Brandan Garrido and Austin Jemison. Even with the two major losses on the offensive side, Coach Bourgeois believes that there will be enough experience in order for the team to improve its 7-5 season a year ago.

“You know that it is always a challenging year especially when you replace close to 3,000 yards of total offense,” Bourgeois said. “However, we do have a big senior class coming up. Offensively, we will be young at the skill positions, but we will have center Griff Strain, who returns as a three year starter, and RB Ryan Armwood to rely on. Defensively, we will be very strong with veterans such as MLB Lane Grigsby, OLB/SS Ethan Amadee, who was our leading tackler from last season, DT/DE Alex Wilson, and DB Ethan Hook, who was our leader in interceptions last season.”

Not only has Bourgeois seen players come and go during his time at Episcopal, but he has also seen a lot of things in the high school football change over that time period.

“The biggest difference has been the split as well as the power rankings,” Bourgeois said. “Also, technology is a huge difference. Back when I first started, we would swap coaches using cassette tapes. Now, we can switch film just clicking one button on the computer.”

Change can be good. In fact, there is a lot of change going on at Episcopal as just a couple of years ago, Bourgeois decided to be the head coach for both the baseball and football teams. He was also once the girls head basketball coach as well. Now, the administration is undergoing innovations to a new field house for the athletic program. Still, there does not need to be a change of scenery for the versatile coach as he has enjoyed his time at Episcopal and has viewed the place as really a second home.

“My wife and kids have been my number one fans,” Bourgeois said. “My two athletic directors, Myra Mansur, who offered me the head coaching job at 29 years old to our present A.D. Randy Richard, have given their support and guidance to make my job easier. I have been very lucky to have quality assistant coaches who have similar beliefs and goals. We have also had great continuity with our staff. Our players work well together in trying to achieve our ultimate goal.”

On the field, there could be nothing be debated about what he has done. Over 24 years, Bourgeois has been the winningest coach in Episcopal football history with an overall record of 114-72. He has led the Knights to the state semifinals in 2002 and 2013 as well as having two undefeated regular seasons in both 2011 and 2013. The 2002 Class 2A Coach of the Year also had success in the other two sports he coached as well. In girls basketball, he was the head coach for 15 years and was selected the Class 2A Coach of the Year in 2007 while leading the Knights to semi-final berths in 2006 and 2007. In baseball,  he took over as Head Baseball Coach in 2015 and has a three-year record of 63-29. His 2016 and 2017 teams both reached the state quarterfinals. The Knights have also won back to back district championships in baseball. Even with the amount of success Bourgeois has had coaching on the field, it is what his players do that are most important to him.

“Episcopal is more than wins and losses,” Bourgeois said. “It cares about the whole child on and off the field. We want our kinds to play multiple sports and be involved with the many different opportunities that Episcopal has to offer.”

As long as Coach Bourgeois still has a whistle and has a passion for coaching, the Episcopal athletic program is one of the best to play sports at in the Baton Rouge area.