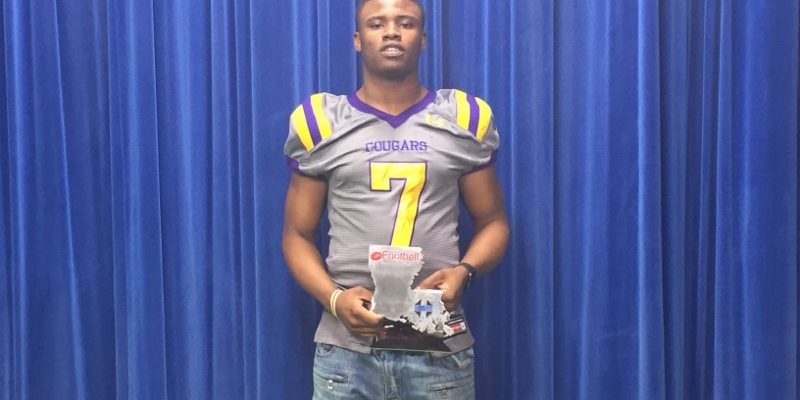 For 4A, it was a hard decision to pick a winner. There are so many great players in this classification such as McDonogh 35 DB and Florida signee Brad Stewart, Plaquemine DB and LSU signee Todd Harris, Carencro LB Rashaad Harding, Neville DT and Alabama signee Phidarian Mathis, etc. You can look at the list at http://www.lafootballmagazine.com/news/c48-recruiting/defensive-player-of-the-year-candidates/, but we decided to give it to the best defensive player that is on arguably the best team in Louisiana high school football. That is Edna Karr DE Tyler Casby. Casby may not be the biggest name compared with the other players that were on the list, but he made just as big of an impact on his team as the others. This season, the senior defensive end from Edna Karr enjoyed his best season of his high school career. Casby was tough to block off the edge. Statistically, he had over double digit sacks and over 20 tackles for loss. He disrupted a lot of offenses during the season and showed up to play against some big time competition. Against Warren Easton, which is always a big matchup, Casby had four sacks and basically took over the game. He was a key player on what could have been Edna Karr’s best team and that is saying a lot. The Cougars dominated opponents and had an undefeated season going to the state championship game. The matchup featured two undefeated teams and 4-A powerhouses in Edna Karr and Neville. The game was controlled by the Cougars throughout the game and the team pulled through for their third state championship win. The season that Tyler Casby had was a magical season being a huge playmaker on the defensive side of the football and helping a team achieve a perfect season. All that Tyler Casby has accomplished led him to a breakout season as well as being our 4A Defensive Player of the Year. On National Signing Day, Casby has signed with Jackson State University to continue his football career. Casby is a huge steal for the Tigers as his explosiveness off the ball and ability to get to the quarterback will pay huge dividends for the team. We caught up with the 4A Defensive Player of the Year as he talked about his breakout year, playing football for Edna Karr, signing with Jackson State, his reaction when he heard about winning the award, and much more in our Defensive Player of the Year spotlight! 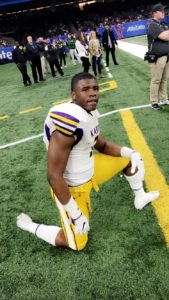 LAFM: What are your stats and accomplishments while at Edna Karr?

Statistically, I had 70 solo tackles, 19 sacks, and 25 tackles for loss. My accomplishments at Edna Karr was making 1st Team All-District, 1st Team All-Metro, All-State, and Louisiana Football Magazine’s 4A Defensive Player of the Year.

LAFM: What was your reaction when you heard that you were our 4A Defensive Player of the Year?

My reaction, when I found out, was really shocking because when I got the call, it was out of nowhere. It just made me feel good because knowing all the work that I put in has served a purpose, but that just motivated me to accomplish bigger and better things.

LAFM: You signed with Jackson State to continue your football career. What is it about the Tigers that has attracted you to play football there?

Well, during my whole recruiting process, Jackson State has been on me and keeping up with myself and my grades. I just feel that they are not just talking about football because I know that football is going to end one day. They are talking about me graduating, and I just feel that Jackson State is the place for me to be. I am going to bring a lot of energy to the team as well as leadership.

LAFM: What are your strengths as a defensive end?

My strengths, as a defensive end, are my violent hands and my quickness off the snap.

The things, that I need to improve on, are getting faster and bigger.

LAFM: Let’s talk about the season. Edna Karr had a perfect season going undefeated and winning the state championship. When did you realize that the team was going to have this type of a season?

When I realized that we had a special team, it was when we came back from camp and we bonded as a team. We told each other that we weren’t going to lose a single game and that we were going to win the state championship. Also, when we were running 110’s, I saw my teammates bending over out of breath and I got up and told everybody to stand up! If you want to win a state championship, this is what it is going to take. It is about how bad you want it!

LAFM: Every year, it seems that it is Neville and Edna Karr in the state championship over the past couple of years. What are your thoughts on the rivalry between the two teams?

Well, Neville and us are the top two teams in the state and we are two well-coached teams year in and year out. It’s an expectation here to be in the Superdome year in and year out. That’s how we prepare year around here at Karr, and I’m sure it’s the same up there at Neville too, which is probably  why you always see the same two schools, or at least one of us, every year in the Dome.

LAFM: What is the best game that you have played in your high school career?

My best game was against Warren Easton. It is a huge district rival for us and is always an intense matchup. I came up big with four sacks that game. I just feel that it was my best game in my year because I was so dominant from start to finish!

Edna Karr DE Tyler Casby is one of the best in the state at pass rushing the quarterback. (Photo courtesy of Majestic Photography)

Eat, work out who I won the championship with, and focus on my grades a little more are things that I like to do when the football season is over.

It was gratifying because we are from the same area. If we are not playing each other, then we root for each other. Yes, it is a heated rivalry between both schools and we are in 4A and they are in 5A. It was a wonderful thing to have both Karr and Landry Walker win because it not only brought my grandfather and myself close together, but it brought our entire community together.

LAFM: What does it mean for you to play for a dominant program like Edna Karr over the past couple of years?

It means a lot to me because during my four years at Edna Karr, I learned new things every single year. Also, Karr is a college preparatory school so on the field and in the classroom, we are successful. One thing that I was told here was put grades first and then football.

LAFM: Is there anybody in your family that has played high school, college, or even at the professional level?

Yes. My dad and my uncle played high school and college football.

An interesting fact about myself is that I could play instruments as well.

LAFM: Why should Jackson State fans be excited to have you on their team?

Jackson State fans should be excited because I am bringing leadership, force, power, and I’m coming with a winning mind set!

LAFM: What is the message that you like to give to next year’s Edna Karr team?

The message I would like to give to the next team is to stay focus and work hard because nothing is going to be given to you and don’t underestimate any opponent.

LAFM: Is there anything else that you like to mention that you didn’t get the chance to mention on the awards show?

I want to give thanks to the whole coaching staff for pushing me until I can’t go any more and never giving up on me. They also told me even when I think that I want to give up, Don’t!

Note: We also want to recognize the other defensive players who won that are juniors and have another year left to play. Our 2A Defensive Player of the Year is Sterlington LB Dawson Snell. We had a tie for 5A Defensive Player of the Year between West Monroe LB John Bailey Gullatt and Ruston DE Tahjmalik Samuel. These three players have a chance next year to repeat. Congratulations to these guys and keep an eye out for them in 2017!