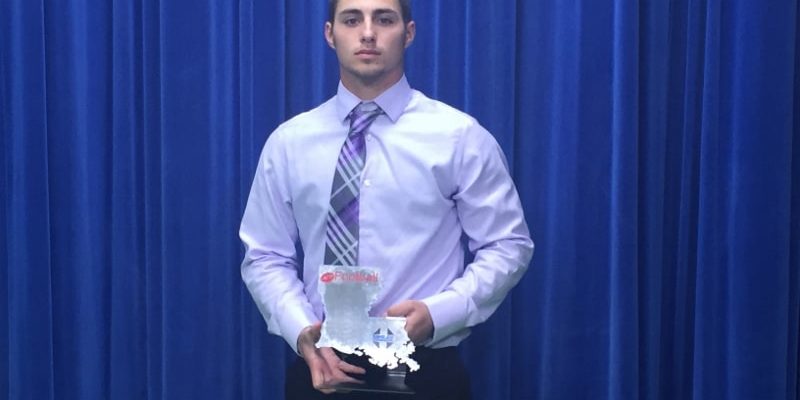 This week, we reveal our defensive players of the year from 1A-5A in the entire state on our T.V. show. These players are the best of the best at what they do and they beat out some very tough candidates to win this prestigious honor. If we had to give out 50 trophies to each of the winners, we would but there are so many that you can give out. Throughout the week, we profile the winners on our website. Yesterday, we profiled Southern Lab DT Shannon Forman Jr. Today, Louisiana Football Magazine reveals the 3A Defensive Player of the Year in Lutcher DB Dylan Recotta!

Like Shannon Forman from Southern Lab, Lutcher’s Dylan Recotta was part of a team that is trying to build off a state championship from the year before. The difference is that Lutcher High School was replacing a legendary head coach in Tim Detillier after he decided to retire after winning his fourth state championship. The Bulldogs hired former St. James Head Coach Dwain Jenkins to continue the success of the Lutcher football program. This year’s team had a really good chance of repeating a state championship even with the coaching changes. Everybody knew that there was a lot of talent on the offensive side of the ball with the likes of Jontre Kirklin, Al’Dontre Davis, Gregory Clayton, and Tariq Belvin, but in order to get back to the Superdome, the team needed their defense to have great playmakers like Sully Laiche from the previous year. The Lutcher Bulldogs got their wish as their defensive leader came in the 5’10, 180 lb. senior defensive back/outside linebacker Dylan Recotta. Recotta’s size may not intimidate anybody, but the way he plays the game is intimidating. This season, Recotta was all over the football field making tackle after tackle as well as causing turnovers. He racked up over 120 tackles, 17 tackles for loss, two sacks, an interception, and has forced a couple of fumbles as well. He has done it all on the defensive side of the football as well as being a defensive leader for the Bulldogs to help the Lutcher Bulldogs win back to back state championships for the first time in their school history. Even with all the success that Recotta has had on the football field, he still has not signed with a college yet. It will be interesting to see what college is going to get Recotta because he may not be the biggest guy on the field, but he is an instinctive player that is always there at the right time. All Dylan Recotta needs is a chance to prove that he can have the same type of career that he has had in high school. Whoever picks him up is definitely giving themselves a gem in the end. We caught up with the 3A Defensive Player of the Year to talk about his season, winning back to back state championships, the schools he is looking at, the player he models his game afer, and so much more in our Defensive Player of the Year spotlight!

Lutcher DB Dylan Recotta had himself a great high school career winning two state championships but is looking for a college that he can be a part of next year. (Photo courtesy of Windy Boudreaux)

LAFM: What is your name, age, and school you played for?

LAFM: What are your stats and accomplishments while at Lutcher High School?

319 total tackles, 220 solo tackles, 8 interceptions, 3A All-State team, and Player of the Week in Week 14 for the greater New Orleans area are my accomplishments over my career.

LAFM: You were named our 3A Defensive Player of the Year. What was your reaction when you heard the news?

When I heard the news, I was not surprised. I put forth the effort and hard work playing this year. I gave it my all and didn’t hold anything back. As a result, my team and myself went back to back for the first time in school history.

LAFM: You are actually our 2nd straight Lutcher defensive player to win this award with Sully Laiche winning the year before. Did he give you any advice on how to be the leader of this defense this season?

Yes. He told me that if you want something, you have to go and get it. That’s exactly what I did.

LAFM: Lutcher started the season as the defending state champions and were trying to repeat for the first time in their program’s history and doing it with a new head coach in Dwain Jenkins. How difficult was this season compared to the year before?

There wasn’t any difference because at the end of the day, we wanted to reach the final goal. We always had a bump in the season, but we kept our foot on the pedal and kept moving forward to achieve the ultimate goal.

LAFM: You were both coached by Coach Tim Detillier and Coach Dwain Jenkins. What is the difference between their approaches to the team and how did the team deal with the coaching change?

There is no difference and it was an easy transition. They both were amazing coaches, but they both only wanted one thing at the end of the day, which is to be a state champion.

LAFM: What is it like playing in two straight state championships and winning them both for a great program like Lutcher?

It’s honestly a blessing. There are no words to explain the feeling that you have after winning a state championship, but winning two is even bigger and you have to actually go through it to know how it feels and I thank God for giving me the opportunity to go through it.

LAFM: Let’s talk about yourself. Unlike the others who won awards, you are still looking for a team to sign with. What are the top schools that you are looking at for next season?

Nicholls, Southeastern, ULL, and any other school in the boot that is willing to believe in me are the schools that I am interested in playing for.

LAFM: What do you want to say to all the football programs that are still looking for a football player on their roster?

I want to say that if you take a chance on me, it will be a steal because I will give you my all day in and day out. I will be a team player and will make a difference. I will come ready to work. I love the game and would love to play at the next level.

LAFM: You are not the biggest football player on the field, but you are really aggressive. Has your size been a big motivation for your stellar play this year?

LAFM: You are an unique player in the fact that you played two positions at outside linebacker and safety. What position do you think that you are going to play at the next level?

I think I can play anywhere that my coach or team needs me to play. I love the game and I will do anything to help the team out.

I play soccer and baseball. I never have time to do anything, but to play sports and work, which I both love to do.

LAFM: Who is the college or NFL player that you watch film on and model your game after?

Tyrann Mathieu (former St. Augustine and LSU defensive back currently with the Arizona Cardinals). The reason being is that he is almost the same person as myself. He is undersized and a hard head. We love to just show people that size doesn’t measure heart and that we just love football.

Lutcher DB Dylan Recotta (14) has his eyes on the backfield before this play in this season’s state championship game. (Photo courtesy of Windy Boudreaux)

Aggressiveness, elusiveness, heart, being mean, and having pure instinct are my biggest strengths to my game.

LAFM: What are some aspect to your game that you need to improve on when you get to college?

Everything. I need to improve on my whole game because there is nothing that can never be good enough. Being satisfied with something doesn’t make you better.

LAFM: Is there anybody in your family that has played high school, college, or even in the NFL?

Yes. I have an uncle that was really good in high school and was an All-State quarterback.

I love the outdoors.

LAFM: Is there anything else that you like to mention that you didn’t get the chance to at the awards show?

I just want to say thank you to everybody that supported me throughout my high school career. I also would love to keep playing football so somebody can give me a chance. You won’t regret it!