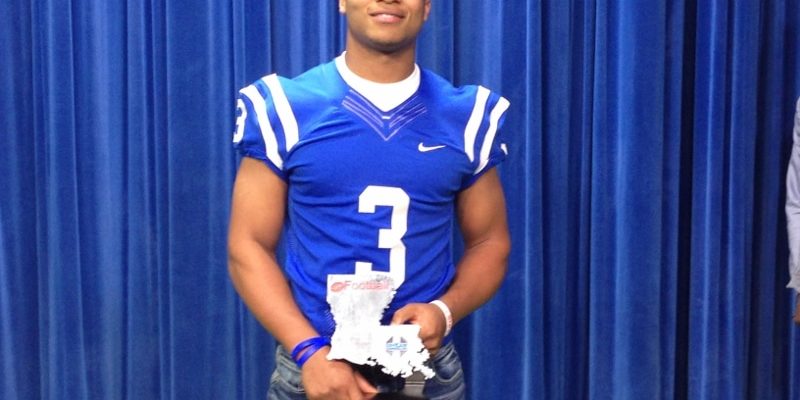 This week, we reveal our offensive players of the year from 1A-5A in the entire state on our T.V. show. These players are the best of the best at what they do and they beat out some very tough candidates to win this prestigious honor. If we had to give out 50 trophies to each of the winners, we would but there are so many that you can give out. Throughout the week, we profile the winners on our website and on our Facebook as well as our Twitter pages. At the end of the week, we will put up our honorable mentions for the great players that were also in consideration for these awards. Yesterday, Louisiana Football Magazine revealed the 1A and 2A Offensive Players of the Year in False River QB Damian Johnson and Ouachita Christian QB Grant Fitzhugh! There was a tie between two of the best offensive players in the state for Class 3A. We just revealed the first 3A Co-Offensive Player of the Year in Jontre Kirklin, and now, we are profiling the second winner for our 3A Offensive Player of the Year, which is Elijah Mitchell.

Erath running back Elijah Mitchell had himself one of the best years in Louisiana high school football in terms of running the football. Most high school players would love to put up these types of numbers over an entire high school career, and all Elijah Mitchell did was put up these numbers over one season. This season, Mitchell led the entire state in rushing touchdowns and rushing yards. The workhorse running back from Erath High School ran for over 2,770 yards and an incredible 42 touchdowns. At 6’0 and over 200 pounds, Elijah Mitchell is big enough to be a running back that can inflict punishment when he runs, but at the same time, he can outrun defenders for big plays. He is a special running back that is only going to get even better when he gets more carries in a game. Mitchell and the running game carried the Bobcats to an eight win season as well as a playoff win. Louisiana Football Magazine Editor/T.V. Host Lee Brecheen had this to say about the Erath running back when he was named to our All-Louisiana team at the beginning of the football season.

“Elijah Mitchell plays for a small school in Lafayette, but he is a running back that you can’t overlook,” Brecheen said. “He’s got that 3rd gear at 6’0 over 200 pounds. Mitchell can run a 4.5/ 40 and you will probably see him at running back in the future at the University of Louisiana Lafayette where he has committed to play football.”

Lee Brecheen was right as Elijah Mitchell has followed his commitment by signing with the Ragin’ Cajuns. Louisiana Lafayette loses an outstanding running back in Elijah McGuire due to graduation, but they do gain another Elijah that is going to be good for years to come for the Ragin’ Cajuns! We caught up with the 3A Co-Offensive Player of the Year as he talked about his Erath football career, winning the award, his senior season, signing with the University of Louisiana Lafayette, and so much more in today’s Offensive Player of the Year spotlight!

LAFM: What is your name, position, and school you played for?

LAFM: You were named our 3A Co-Offensive player of the year. What was your reaction when you heard the news?

I was really proud and very excited when I heard the news!

They just make you feel at home. The school has really good education, and the coaches are just awesome. It’s a great staff and also really close to home!

LAFM: Let’s talk about the season. Erath had a good year going 8-4 and making the 2nd round of the Class 3A playoffs. What are your thoughts on your senior season as a whole?

We came together as a team and decided that we were going to make a run! We worked hard and our coaches did a good job. Everyone was all in!

LAFM: You led the state in rushing and rushing touchdowns. Did you expect to have this type of year that you had this year?

I didn’t expect to have a season like I did. I just really don’t think about stats. I just like to run, play football, and have fun with my teammates.

LAFM: A running back would be nothing without his offensive line. Do you want to give a shout out to the guys that blocked for you this season and don’t necessarily get the recognition?

I want to give a shout out to my offensive line: Steven Vallot, Jax Harrington, Spence Suite, Zack Delcambre, Jared Broussard, my fullback Matt Anderson, and my receiver Bren Faulk for opening the holes for me. They all did an awesome job this season.

Berwick was my best game because it was homecoming and everyone was there to support. It was packed!

LAFM: What motivates you to play the game of football?

My parents and my girlfriend Jasmine LeJeune. I just want to give them the world.

LAFM: What is your advice to next year’s Erath team?

If y’all stick together, work hard, and stay dedicated, you guys can do anything that you put your minds to!

Train and get ready for next season!

LAFM: Who is the college or NFL player that you watch film on and model your game after?

Elijah McGuire (former Vandebilt Catholic and Louisiana Lafayette running back). I love to just have the ball in my hand and making plays like Elijah does.

The biggest strengths, to my game, are my vision, seeing all the back door cuts, and running over people.

I need to work on blocking in the pocket.

LAFM: Why should Ragin’ Cajun fans be excited to have you on their football team?

I’m willing to work hard and I love to win as well as represent the Ragin’ Cajuns in a good way!