2nd Round of the Playoffs: Jennings High School vs. Brusly High School 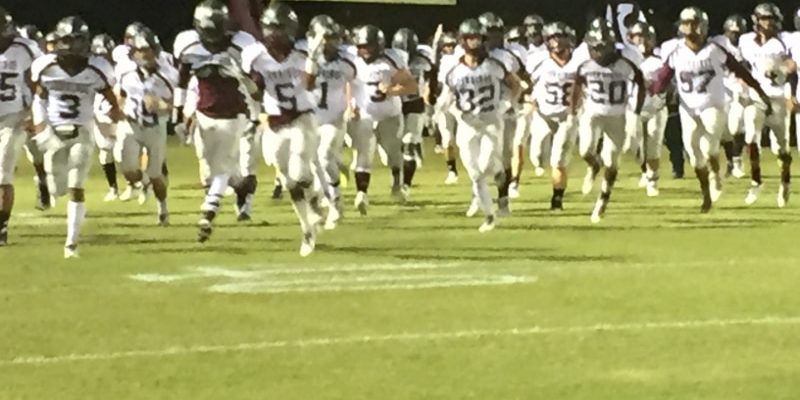 2nd Round of the Playoffs: Jennings High School vs. Brusly High School

In a week full of great playoff matchups, I went to see the Brusly-Jennings playoff game. Both teams are coming off big time wins in the first round and are looking to advance to the next round. The Brusly Panthers lead by Head Coach Marc Brown won their first playoff game against a higher seed in Berwick 52-36. The Jennings High School Bulldogs lead by Head Coach Russell Phelps won their first round matchup against Church Point 35-8. That set the stage up for a big time second round game in the Class 3A bracket between the 6th seed Jennings Bulldogs vs. the 22nd seed Brusly Panthers. Coming into the game, there was a feeling that both teams would be successful in the ground game with two of the best athletes on the field. Brusly has QB Jason Holliday, who is 6-4, 205 and can run a 4.5. Jennings has one of the best running backs in the entire state in Travis Etienne, who comes into the game with almost 2,000 yards rushing and over 30 touchdowns. With two high scoring offenses with playmakers all over the field, this game had a good chance of being high scoring and it was just that.

The Brusly offense moved the ball well against the Bulldog defense in the first half but the third quarter turnover really changed the game for the bad for the Panthers. (Photo taken by Jace LeJeune)

Even though the game was at Brusly High School, it was not a clear home field advantage as the Jennings fans made the long drive and represented their school well. The Bulldogs won the toss and elected to defend. On the Panthers’ opening drive, like expected, there were no pass plays. The Panthers drove down the football field on thirteen plays. Holliday and Zavian Bell ran the football against a Bulldogs defense that was trying to get settled in the game. Bell punches it in the endzone to give the Panthers the early 6-0 lead, but the extra point was blocked. On the first drive for the Bulldogs, they do what they do best and that is hand the ball off to Etienne and let him loose. On the first three runs, the Panthers contained Etienne well until the fourth carry when Etienne went outside and outran everyone for a 48 yard touchdown. With the successful extra point, the Bulldogs took their first lead of the game at 7-6. Etienne’s first touchdown run was just a serving sample of what we would see later in the year. At the end of the first quarter, the score remained 7-6 Jennings.

At the start of the second quarter, it was the Brusly Panthers that had the momentum with another nice long drive that was dominated by the running duo of Holliday and Bell until both proved that the duo could get it done in the passing game as well when Holliday threw a touchdown to Bell to make it 12-7 Panthers. The two point conversion was no good and the Panthers regained the lead. After a couple of minutes when both teams had to punt, things became very interesting once again. The Bulldogs got the football at their own 32 yard line and once again, Etienne found running room and ran 58 yards for his second touchdown to give the Bulldogs a 14-12 lead. Just two plays  later, Holliday dropped back to pass and saw nothing but green grass in front of him and he used his speed to run for a 76 yard touchdown to give the Panthers the lead again. In just under a minute, 15 points were scored between both teams. The score was now 20-14 Brusly. That was the score going to halftime. After a back and forth first half, the second half was expected to be just as good, but it didn’t turn out that way.

Travis Etienne starts the second half pretty much like he started the first half and that is scoring touchdowns. He returns the opening kickoff for a touchdown and gives the Bulldogs back the lead. Etienne scored all three touchdowns for the Bulldogs to this point. Now, it was the Brusly offense’s turn to move the ball down the field. Another weapon for the Panthers made a big play and that was Tyler Nash with a long run setting Brusly up inside the twenty yard line. Sooner or later, a defense had to make a big play and that was what the Bulldogs defense did. The Panthers were driving and looking to take the lead again. Holliday kept the football on a designed quarterback run, and here comes Malik Joseph for the Bulldogs making a big time hit on Holliday. Holliday fumbles the ball and the Bulldogs recover. Not only they don’t give up a touchdown, but the Bulldogs keep the lead as Joseph makes a big time play when the team needed it the most. That play really turned out to be the turning point in this game as the very next play after the turnover, Etienne broke loose again and ran away for a 91 yard touchdown run. The score was 28-20, but the game changed dramatically even though the game was still an one score game. Not only did Etienne have success running the football, but his counterpart sophomore running back Darrian Achane had some pretty impressive runs especially when he rolled over a Brusly defender and kept running with his knees never touching the ground. Achane had two rushing touchdowns and proved that he could get it done as well. The Panthers ended up scoring another touchdown but the damage was already done. The running game was too strong for the Panthers and the Bulldogs ran away with the football game after trailing at halftime. The final score was 56-26 Jennings High School as the Bulldogs get an impressive win to move onto the next round.

Jennings RB Travis Etienne walking to the sideline after accounting for almost 250 yards of offense and five touchdowns. (Photo taken by Jace LeJeune)

The leading stat leaders for the Panthers was Jason Holliday who ended his great Brusly career with over 140 yards rushing, a rushing touchdown and two passing touchdowns. For the Bulldogs, it was Travis Etienne who is continuing his great senior season with a great individual performance. Etienne finished with over 240 yards rushing and five total touchdowns. What was even more remarkable was that he only touched the football ten times! It was a tough ending for the Brusly Panther’s season, but there is no need to hang their heads. The Panthers finished with an 8-4 record and a playoff win. Congratulations to Coach Brown and the Brusly High School Panthers on a great season. Coach Phelps and the Jennings Bulldogs improve to 11-1 and next week, they will face 3rd seed Kaplan who won their second round playoff game against North Webster 8-0. The winner of next week’s game between Kaplan and Jennings will determine who will play in the semifinals. With a star player like Etienne and a hot team like Jennings right now, they have a great chance of representing the Jennings community in the Superdome in December.