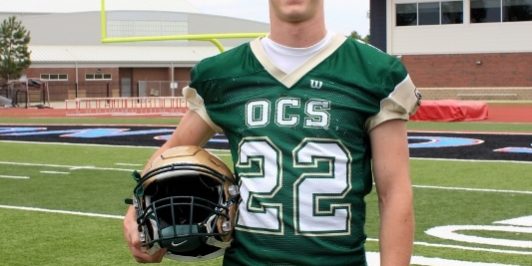 This week, we reveal our offensive players of the year from 1A-5A in the entire state on our T.V. show. These players are the best of the best at what they do and they beat out some very tough candidates to win this prestigious honor. If we had to give out 50 trophies to each of the winners, we would but there are so many that you can give out. Throughout the week, we profile the winners on our website and on our Facebook as well as our Twitter pages. At the end of the week, we will put up our honorable mentions for the great players that were also in consideration for these awards. Today, Louisiana Football Magazine reveals the 2A Offensive Player of the Year in Grant Fitzhugh!

Ouachita Christian QB/DB Grant Fitzhugh is the son of Ouachita Christian Head Coach Steven Fitzhugh, who is one of the most successful head coaches in the state regardless of class. Do not let the coach’s son fool you. Grant Fitzhugh is a really good football player. When he graduates this year, he will be known as one of the best athletes to ever play for the Eagles. He is in the record books as both an offensive and defensive player in Ouachita Christian football history. He is in the top ten in each of the following categories: pass completion percentage, pass efficiency, total yards, touchdowns, total tackles, pass breakups, forced fumbles, and interceptions. Talk about being a playmaker both on offense and defense. Grant Fitzhugh was our 2A offensive player of the year this season because of his leadership and his incredible stats of over 3,000 yards and 45 total touchdowns, but he also made a claim for being a candidate on defense as well with 60 tackles, four tackles for loss, three forced fumbles, three pass breakups, and an interception returned for a touchdown. Also, not to mention that he also had a punt return for a touchdown. Grant Fitzhugh got the job done as a quarterback, a defensive back, and a return specialist. He is a special player, and Louisiana Football Magazine Editor/T.V. Host Lee Brecheen is very impressed with his ability on the football field.

“Grant Fitzhugh’s biggest strength is that his competitiveness and leadership, which a lot of kids don’t have,” Brecheen said. “When Grant has the ball in his hands, he is a treat to watch whether it will be running, passing or playing defensive back.”

Grant Fitzhugh has ended his incredible Ouachita Christian career off with a great senior season, but the journey is not over for the talented athlete. Grant has signed to play at Harding University, which is located in Arkansas. The Bison have themselves a very underrated football player, who can play any position, is competitive, and is a very good athlete. The 2A Offensive Player of the Year talked about his great career playing for the Eagles, playing for his father, signing with Harding, and so much more in today’s player of the year spotlight!

As a QB for Ouachita Christian, Grant Fitzhugh accounted for over 3,000 yards and 45 total touchdowns his senior season. (Photo courtesy of Amy Terral)

LAFM: What are some of your accomplishments in your career?

LAFM: What was your reaction when you heard the news that you were our 2A Offensive Player of the Year?

When I heard that I was the 2A Offensive Player of the Year, I was so excited and felt very blessed because there are so many great players in 2A. I did not expect this honor, but am very grateful to receive it. God is good!

I’m pumped to go to Harding University because of the great Christian atmosphere. The emphasis and motto of the program is “Honor God”, and that is what I am most excited for.

LAFM: For the people unfamiliar with the college, tell us a little more about the program and why you fit in their system?

Harding has an outstanding program on the field as well. This past season, the team was 13-1 with the only loss coming to eventual national champions. The team had an undefeated regular season with an outright conference title. I believe we will win at least one national championship in the next few years. I will play quarterback in our triple option system, which has led the nation, regardless of position, in rushing yards per game last season.

Ouachita Christian QB/DB Grant Fitzhugh signs with Harding University, which is one of the most successful D-II schools in the country, with his parents at his side. (Photo courtesy of Amy Terral)

LAFM: You played for your dad Steven Fitzhugh, who has been a highly successful coach at Ouachita Christian. What is it like playing for your dad because a lot of kids do not get the chance to experience anything like that?

It was so much fun being able to play for my dad. He pours his heart into it and give us his best every day. It was so cool to go from playing against him in the front yard to playing for him underneath the lights on Fridays. He was a dad at home and a coach on the field. We has a ton of fun together.

LAFM: What is your dad like on the sidelines when you make a big play?

He would sometimes be cool, calm, and collected after a big play, but usually, no matter who makes the play, he is super intense and is yelling for us. We had some moments that we will treasure for the rest of our lives.

LAFM: You have played many positions for the Eagles. You have played quarterback, defensive back, and even as a kick returner/punt returner this year. Have you even got a break on the field during a game, and which position was your favorite to play?

I got a break on defense or special teams sometimes when it wasn’t a close game, but some games, I hardly ever stepped off the field. I don’t necessarily have a favorite position, but I love playing quarterback and defensive back. I love having the ball in my hands every play at quarterback, but there is no feeling like hitting a receiver in jaw as a defensive back as well. I’m very grateful that I was able to play both positions.

LAFM: This season was a very good one for OCS. The Eagles won 10 games and made it to the 2nd round of the playoffs. What are your overall thoughts on your senior season?

This past season was so much fun. We had a blast every day that we were out there, and being that it was the last year made it even more special. I have played with many of our 15 seniors since we were in kindergarten or first grade. This year was an overachieving group because we did not have a ton of raw talent, but we worked hard every day and fought tooth and nail on the field. We played with passion, and it was an awesome senior year.

The strengths, to my game, are my running game, my disciplined reads, and understanding of the game.

I can improve on my passing game and will have to adjust to a completely new style of offense.

LAFM: Who are the college or NFL players that you model your game after, and why did you choose those particular players?

Two of my favorite players ever were Colt McCoy (former Texas Longhorns QB currently with the Washington Redskins) and Tim Tebow (former Florida Gators and NFL QB) when they were in college. Each gave all the glory to God and made a difference in all that they did.

LAFM: What was your best game of your career and why did that particular game stand apart from the other games you played in?

The Rayville game, in my junior year, I had 213 passing yards, two passing touchdowns, 93 rushing yards, and two more rushing touchdowns. On defense, I had 14 tackles, an interception, and a fumble recovery. One of the tackles that I made was a tackle for a loss on 4th down when they were driving to score. It was an one score game coming out of halftime, and we went on to beat the future semi-finalists by a few touchdowns.

LAFM: What is an interesting fact about yourself that our readers did not know about?

LAFM: What is your message to next year’s Ouachita Christian team?

See ya in the Dome boys!

LAFM: Why should Harding fans be excited to have you in their program?

Harding fans should be excited because I am going to make a difference for Jesus among the team and on campus there. I will be a hard worker and give all I have. I will work and do my part to lead the team to a national championship as well. I will be selfless and persistent.

LAFM: Is there anything else that you want to mention that you did not get the chance to mention on the awards show?

I’m so thankful to God, my family, my friends, and LA Football Magazine/T.V. for this award!

Note: We also want to recognize the 1A Offensive Player of the Year False River QB Damian Johnson Jr. for his incredible season. Watch out for him next year as he returns to False River and has a chance to repeat the award!