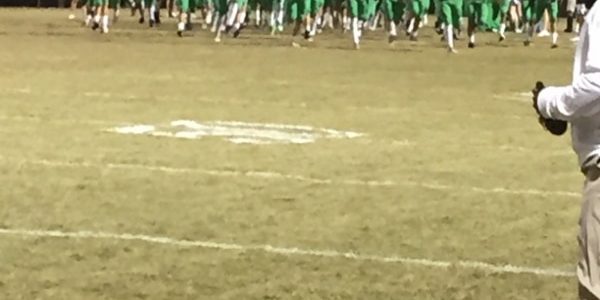 Miles Lapeyre and the high flying passing attack put up plenty of points on the Tigers. (Photo taken by Jace LeJeune)

It is that time of the year, football fans. It is the playoffs which means win or go home. The game that I went to tonight was a great match up in the Division III bracket between the #5 seed Dunham Tigers vs. the #12 seed Isidore Newman Greenies. Coming into this game, both offenses were really explosive. The Dunham Tigers have a great running attack with Mike “Big Cat” Williams at quarterback and Tony Huey at running back. The Isidore Newman Greenies have a high flying passing attack led by quarterback Miles Lapeyre, who is one of the best quarterbacks in the state. Both offenses have two different styles of way, but both teams can score points, and that was expected coming into this game. A game like this will come down to which defense makes more plays. Well, the game did not disappoint in terms of scoring and big plays between both teams.

The game could not start any better for the Dunham Tigers as Derek Stingley Jr. took the opening kickoff 87 yards for the touchdown. The Tigers were up 7-0 with only 13 seconds into the game, but Lapeyre and the Greenies drove down the field in a couple of plays and the drive resulted in a six yard touchdown pass from Lapeyre to Storey Charbonnet. On the first drive for the Dunham Tigers, star running back Tony Huey, who came in this game with an outstanding 33 touchdowns, ran for a 13 yard touchdown to give the Tigers the lead, but a missed extra point made it 13-7 Dunham, and this will not be the first time that we will see a mixed extra point in this game. After both offenses were settling in the football game, the score remained 13-7 throughout the first quarter.

In the second quarter, Dunham started to use their “Big Cat” Mike Williams utilizing him in the power running game and in the passing game. Williams showed how “big” he really was as he used his 6’1, 230 pound frame run running over three Newman defenders in what was one of the most impressive plays you would see from a player all year for a 22 yard touchdown run. It looked like the Tigers were going to run away from the Greenies early in the second quarter. The Greenies turned the ball over on the next possession and Huey took advantage as he broke many tackles on his way for a 46 yard touchdown run to extend the Tiger’s lead at 26-7 but just when you thought the Tigers had the game in the bag, here come the Greenies. Before halftime, Lapeyre threw another touchdown pass to Charbonnet closing the gap and making it a two touchdown game. There were still a couple of seconds left to go into halftime, and the Tigers were driving down the field. With four seconds left to go into halftime, Coach Neil Weiner decided to take a shot into the endzone instead of trying the long field goal attempt. The decision almost worked out for the Tigers as Williams ran and was just stopped short of the one yard line. The time ran out and the Tigers led the Greenies 26-14 at the half.

In the opening drive of the third quarter, Lapeyre moved the Greenies offense down the field again, and on third and goal, Lapeyre used his improvisation skills and threw a third touchdown pass on the run to Murray Calhoun for a 12 yard touchdown pass. The Greenie defense held the Tiger offense and got a good return that set the offense up inside the five yard line, but the Tiger defense held the Greenies to a field goal making the score 26-24 Tigers. It looked like that the Greenies have the momentum right now, but Huey takes the momentum right back with a 75 yard touchdown run to make it 32-24 and the Tigers went for two after that play with a Mike Williams run making it 34-24.  Lapeyre gets the ball back and throws a short screen pass to Joel Taylor and Taylor uses his speed and outruns the Tiger defense for a 65 yard touchdown to make it a field goal game. It was pretty evident that the Greenies had to steal a possession to give themselves a chance against the great rushing attack the Tigers had, and they did just that. Williams ran the ball for a short game, but Kobe Porche made a heads up play and stripped the ball  from Williams and recovered the fumble for a turnover. The Greenies did not take advantage of the turnover as the offense went three and out, but it gave the defense confidence that they can make a couple of stops for their offense. At the end of the third quarter, the score was 34-31 Tigers.

Mike Williams, Tony Huey and the offense put up 40 points against the Greenies, but it was not enough. (Photo taken by Jace LeJeune)

Now, it is the moment of truth. There are 12 minutes left to play in the game and it was time for a team to move onto the next round and another team would go home. The Greenies kick a field goal to start the fourth quarter, and the score is all tied up at 34. The Tigers try and take the advantage and move the football. After running the ball on five plays, Williams first looked like that he was going to run, and then, took a step back and threw a tightly covered completion to E.J. Hitchens setting up a first and goal. Two plays later, Huey punches it in the endzone and possibly gives the Tigers a seven point lead except he did not. The extra point was no good, and with just over four minutes remaining,  the Tigers lead by six. Now, it is Lapeyre’s turn to be the hero for the Greenies. Every quarterback would love to be in the position that Lapeyre was and that was give his team the lead in a playoff game. The Greenies were driving down the field until the team faced a fourth down and seven. For the Tigers, it was a chance to get off the football field and have a chance of sealing the win. However, Lapeyre threw a clutch backs shoulder pass to the freshman wide receiver Jarmone Sutherland to extend the drive. A couple of plays later, Lapeyre threw to Calhoun for a completion even though it looked like Calhoun caught it out of bounds. The referees ruled it a complete pass and the ball was placed inside the 10. On third and goal, Lapeyre threw a three yard touchdown pass to Charbonnet for the game tying touchdown. Now, it was time for the crucial extra point that would give the Greenies their first lead of the football game. The snap was good. The hold was good and the kick was good by Kirk Groome to give the Greenies a 41-40 lead. With a minute left to go, the Tigers had a chance to win the game with a field goal or a touchdown but with under 20 seconds left, Williams dropped back to pass and was sacked and fumbled the football. It was recovered by the Greenies and the Isidore Newman Greenies held on to get the upset 41-40. It was a great game and both teams deserved to go to the next round but it was the Greenies who never gave up after losing the entire game and got the win in the final seconds.

It was a tough early postseason loss for Coach Weiner and the Tigers, but you cannot take away the great season the Tigers had. The leading stat leaders for the Tigers was QB Mike Williams who was 13-21 for 113 yards and ran for 119 yards and a touchdown. Senior running back had a great game to cap off a great high school football career. Huey ran the ball 16 times for 197 yards and three touchdowns. For the Greenies, Miles Lapeyre had a huge statistical game as usual with four touchdowns passing in the game. The Dunham Tigers finish their season with a 9-2 record. Coach Nelson Stewart and The Isidore Newman Greenies improve their record to 7-4 and they will face Catholic New Iberia in the next round. If the first round of the playoffs is a preview of what is come, then, we should have an exciting couple of weeks of Louisiana high school playoff football.