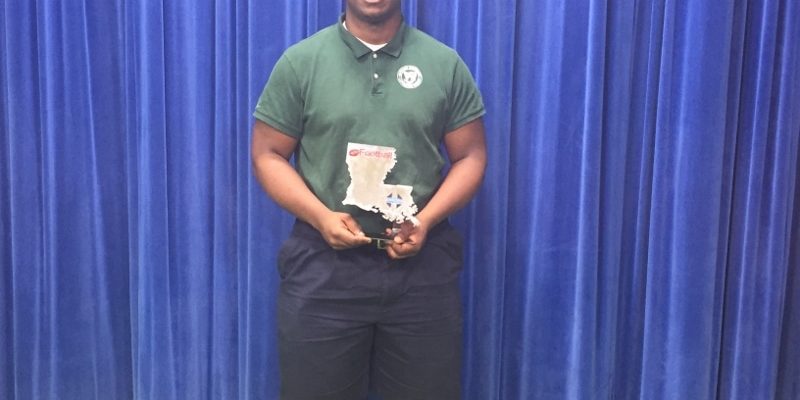 This week, we reveal our defensive players of the year from 1A-5A in the entire state on our T.V. show. These players are the best of the best at what they do and they beat out some very tough candidates to win this prestigious honor. If we had to give out 50 trophies to each of the winners, we would but there are so many that you can give out. Throughout the week, we profile the winners on our website. Today, Louisiana Football Magazine reveals the 1A Defensive Player of the Year in Shannon Forman Jr. !

For most of his career, Forman was the sidekick on defense to his teammate Chris Allen who has signed with the Alabama Crimson Tide to play football. Louisiana Football Magazine has decided that Forman needed some credit as well for doing the dirty work on the talented defense for Southern Lab. Over his career, there was not a lot of things that the senior defensive lineman did not accomplish. Over his four years at the school, he made the All-District team four times as well as winning two state championships. However, this award is not what you do over a career, but is over an entire season. This season, Shannon Forman Jr. had over 50 tackles, seven sacks, 15 tackles for loss, and two forced fumbles. Forman was a major force on the interior of the mighty Kitten defense, but he shows that he is more than capable of playing on the defensive line. On offense, he showed his athleticism by playing some fullback in goal line situations. He gets his athletic ability from his father Shannon Forman, who was a standout basketball player and a four time state champion for the Southern Lab Kittens. With all the success that Forman has had on the gridiron, it did come with some adversity. Earlier this year, the state of Louisiana witnessed a flood that affected a lot of families including the Formans. Shannon Forman II used the flood as motivation to play the best football of his young career, carry the Kittens to back to back state championships, and win the 1A Defensive Player of the Year. He gets the job done on the field as well as off the field. Shannon Forman Jr. is a great guy as well as a great football player that is going to do some great things at Arizona State where he has signed to continue his football career. We caught up with the 1A Defensive Player of the Year to talk about his career, signing with Arizona State, his father, the player he models his game after who also played at Southern Lab, and much more in our Defensive Player of the Year spotlight!

LAFM: What are your stats and accomplishments over your Southern Lab career?

I had 255 tackles, 28 sacks, five forced fumbles, and eight pass deflections over my career. I was also named on four All-District teams, a two time state champion, two time All-State Honorable Mention, and Louisiana Football Magazine’s 1A Defensive Player of the Year my senior year.

LAFM: Like you said, You were named our 1A Defensive Player of the Year. What was your reaction when you found out the news?

My reaction to winning this was shock. Winning this award over so many great and talented players in 1A is shocking to say the least!

LAFM: You actually won over your teammate Chris Allen. Both of you were a big one two punch on defense. What is your relationship over your career with Chris?

On the field, Chris and I are very competitive. We would get on each other when one of us is doing something wrong, but off the field, we are like brothers.

LAFM: The Kittens started the season as state champions and were trying to repeat which eventually the team did, but was this season tougher because of the target on your back from the previous season?

I felt like this year was much easier due to all of us having that good chemistry from the summer leading into the season.

LAFM: You also had some looks at fullback this season. How did that all come about?

The whole running thing came to the style that Coach Randall wanted us to play and at first, I was just a lead blocker, but after camp, Coach Randall saw that I could run with the skill and he let me run the ball against Bogalusa. After I first ran the ball, he never looked back to change me from running the ball.

LAFM: Your head coach Marcus Randall has been successful at all levels of football and has experienced the recruiting side just like yourself. What is some advice that he has given you that has helped you deal with recruiting?

Coach Randall just basically told me to just choose the school that is right for myself, and don’t let anybody choose it for you.

LAFM: Your dad was also a legend at Southern Lab. What is it like playing for the same school and having the same type of career with the amount of championships you and your father have won?

It’s great for both of us seeing me go through the same type of success that my father achieved when he was in high school.

LAFM: In speaking of your family, the flood, earlier this year, affected you and your family before the football season started. What is the update on your home and how much did the flood motivated your stellar play this season?

We are back living in my house and the flood just motivated me to play this season and go as hard as I could.

LAFM: You have signed with Arizona State over other D-I schools. What is it about the Sun Devils that has attracted you to play football there?

What attracted me to Arizona State was the way they treated me. They treated me like family throughout my whole recruiting process.

LAFM: You have played in a lot of big time games over your career, but what was your favorite?

My last game against Kentwood was my favorite game.

I model my game after Marcus Spears (former Southern Lab Tight End, LSU defensive end, and NFL defensive end). I just loved his explosiveness off the ball and passion for the game.

LAFM: What are some things that you need to improve on when you get to Arizona State?

My passion for the game is the area to my game that I need to improve on.

The one thing people don’t know about me is that I am a shy person outside the game of football.

LAFM: What is your message to next year’s Southern Lab team?

My message toward next year’s team is to keep the legacy going. Put SU LAB ON THE MAP.